Not in my name!

Not in my name! 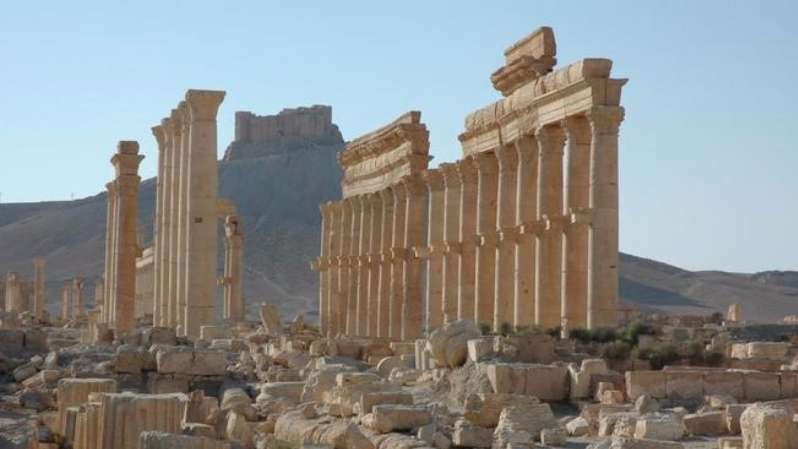 Not in my name!
__new_Underarticle_image_EN__
R. Sikora
This morning I listened to an officer of the "Syrian Army" glorifying the liberation of Palmyra from ISIS on Damascus radio.

Although any ISIS defeat in Syria is a good thing, no matter who it is that manages to drive them out, the things that were being said were offensive to me in ways that had nothing to do with terrorists or politics.

The man on the radio was claiming that the regime’s victory in Palmyra was a great victory for Christianity and kept saying how Jesus was with the Syrian Army and how now they are ready to take on so many other areas of Syria next.

As a Christian I am appalled at the implication that Jesus would approve of what the Syrian Army has been doing in Syria.

Could this man possibly believe that the ruins of the ancient temples of numerous gods would be of more importance than human lives to Jesus who accused the Jewish priests of his time of being “whitewashed tombs full of dead men’s bones” because they put on airs of being holy but knew nothing about love for their fellow man?

Palmyra’s value as a historical site is unquestionable, but its place in the history of my religion is dubious at best.

Once dubbed the "Bride of the Desert," Palmyra was a vital stop for caravans crossing the Syrian desert. The city is mentioned in tablets dating from as early as the 19th century BC, when it was a trading city in the extensive trade network that linked Mesopotamia and northern Syria. Palmyra was also mentioned in the Old Testament as being city that had been fortified by Solomon.

Over the centuries Palmyra continued to flourish as a caravan stop as it sat approximately halfway between the Mediterranean Sea in the west, and the Euphrates River in the east, on the trade route that connected the western world with the Orient.
__new_in_first_article1__

After becoming part of the Roman Empire during the reign of Tiberius (14 – 37 A.D.) Palmyra continued to grow in importance as a trade route linking Persia, India, China and the Roman Empire.

The golden age of Palmyra was reached during the 2nd and 3rd centuries as it flourished due to extensive trading, as well as its favored status under the Romans.

During its heyday, temples dedicated to Aramean, Babylonian and Mesopotamian deities were built in Palmyra --- but within a year of Palmyra’s overly ambitious Queen Zenobia’s capture by the Romans in 272 A.D., Palmyra was destroyed and its inhabitants slaughtered.

In the 6th century, Emperor Justinian rebuilt the city’s defenses and a few Byzantine churches were built, but most of Palmyra remained in ruins.

In 634 A.D., Palmyra was taken by Muslim Arabs under Khalid bin al-Walid in the name of the first Muslim caliph, Abu Bakr. A castle that was surrounded by a moat and could only be reached by way of a drawbridge was built on top of a mountain overlooking the desert oasis.

A major earthquake destroyed what was left of Palmyra in 1089 A.D.

The ancient city of Palmyra was subsequently "rediscovered" by two English merchants living in Aleppo in 1678, but excavation of the ruins did not begin until 1924.

__new_in_first_article2__
The ancient archeological ruins were declared a World Heritage Site in 1980 and until Assad’s war on the people turned Syria into a less than palatable destination for foreign visitors, Palmyra was one of the most popular tourist destinations in Syria.

Since then residents of the area who were displaced by the invasion of ISIS last May have been mourning the tragic end of their city.

The Palmyra Fb page announced that “While some foolish people on the media talk about " liberation" and "salvation" by the Assad army, the people of Palmyra are quietly honoring the funeral of their city.”

Between ISIS and Assad the historic site’s nearby city of Tadmor has been emptied of almost all its inhabitants. The majority of Palmyra’s ancient treasures have been lost.

The regime had already emptied the museum, buried the contents and probably ransomed most of them as they have the Syrian people in order to finance their unholy war.

Along with the ancient temples and tombs being reduced to rubble by ISIS after the regime’s planned evacuation, the citadel and more than half the civilian homes were bombed by Russian airstrikes.

In the aftermath of the destruction of a major international archeological site Assad’s mufti in Damascus, the same man who threatened Europe and the US with suicide bombers if Assad was tampered with, makes preposterous proclamations about God giving them an Easter victory in Palmyra in Jesus’ honor and cries over the deepness of his faith after such a victory.

As a Christian I can only say “Get thee behind me Shaytan!”