Is ISIS performing the terrorist threats of Assad’s Mufti in Europe? 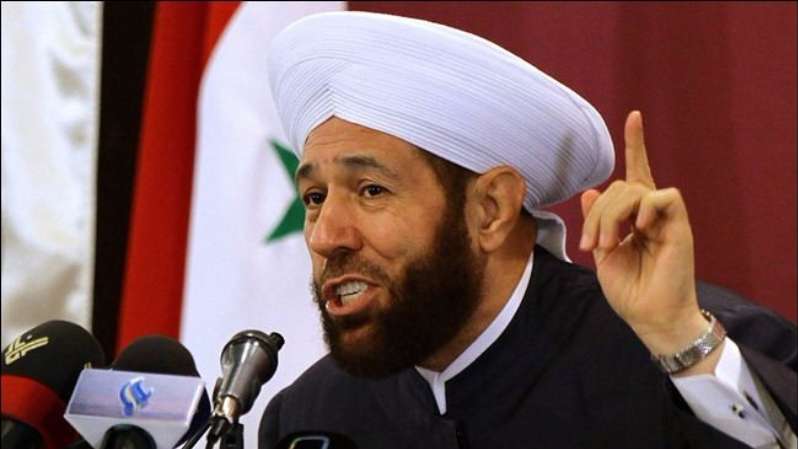 Orient Net - Al-Quds Al-Arabi
I do not know why the Western media turned a blind eye to the threats that were made by Assad’s Grand Mufti, Ahmad Hassoun, in October 2011.
These dangerous threats, issued by the highest religious authority in the Assad regime, passed by casually in Western media without calculating its actual threat on Europe’s security. The Mufti is only an employee for the security services and no minor employee is given the permission to give out statements without consulting with the higher people, let alone issuing the terrorist threat by the highest religious official in the country.
There is no doubt that Hassoun’s threat – which threatened the Europeans if they do not obey the orders of the Assad regime – has been written in one of the branches of the Syrian terrorist intelligence and not in the Fatwa house. Nonetheless, Western media failed to write the possibility of the involvement of the Assad in the terrorist attacks that washed over Europe; the Paris attacks of last month and the Brussels terrorist attacks a few days ago.
Is it a kind of overlook, or it is required by the Western media to not focus too much on the atrocities of the Assad regime and to gloss over what Assad is doing, because the gatekeepers of the global media do not want to aggravate the regime?
Four years ago, Assad’s Mufti threatened Europe and the US that if Syria was attacked or bombed then they would suffer from suicide operations carried out by people residing in their own countries.
Hassoun said in a video clip on YouTube: “Once the first rocket is launched onto Syria, the people of both Lebanon and Syria will be suicide bombers on Europe and Palestine.”
Hassoun added: “I say it to all of Europe and America: We will send suicide bombers, for after today, an eye for an eye and a tooth for a tooth with the instigator being guiltier, and you are the ones who hurt us.”
He went on to say: "We say to every Arab and human being: do not think that those who will detonate themselves in France, Britain and the US will be Arabs and Muslims; they will be the new Mohamed al-Dorra.”
What does the West need more than this explicit confession of the religious spokesman of the Syrian intelligence? Here is ISIS explicitly admitting that it’s behind the terrorist acts in France and Belgium. Here are the threats of Ahmad Hassoun being implemented strictly at the hands of young Muslims living in Europe as he had literally vowed. Why does not Europe open investigations into Ahmad Hassoun’s threats?
Do not they know that most of the terrorist movements that wreak terror in Syria, the Middle East and Europe grew up in the prisons of the Assad regime? Did not they watch the famous Syrian intelligence agent – Abu al-Qa’qaa – who was recruited by Syrian intelligence during the US intervention in Iraq to train terrorists and suicide bombers and send them against US troops in Iraq? And when Abu al-Qa’qaa’s role was over, Assad intelligence sent him a person to shoot him, and then pinned the crime on an unknown person.
Did they not hear what Syrian intelligence men said when asked about their relationship with jihadists? High-ranking security officers in Syria would sarcastically say: “The jihadists want to meet with mermaids in heaven, and we make it easy for them by sending them to carry out jihadi tasks.”
A Syrian expert, who was a frequent visitor to the Syrian Intelligence branches in Damascus and Aleppo, says that he could see with his own eyes the training operations of terrorists and extremist groups in Syrian prisons, adding that the prisons – in which the extremists lived – were more like hotels.
It is noteworthy to mention that that expert witnessed one day members of the Syrian intelligence bringing boxes full of banned books to one of the prison “hotels”. These books were written by extremist terrorists. The inmates would devour one book after the other and feed their minds with such extremist thoughts.
We have observed how Assad’s intelligence released hundreds of extremists from prisons in the beginning of the revolution in order to deviate the revolution’s correct path and to portray it in the eyes of the Syrians and the world as a revolution of terrorists and infidels, not a people’s revolution. What is the relationship between members of these extremist groups – who were released from prisons by Assad – with the terrorists who are terrorizing Europe, and those who Ahmad Hassoun threatened to use to terrorize Europe in 2011?
And did not the US Secretary of State accuse Assad regime, time after time, of being responsible for the emergence of ISIS in Syria due to its terror policies?
Once again, Europeans: go back to the threats of the Grand Mufti of Syria in 2011 and judge for yourselves.
Faisal al-Kasim in al-Quds al-Arabi