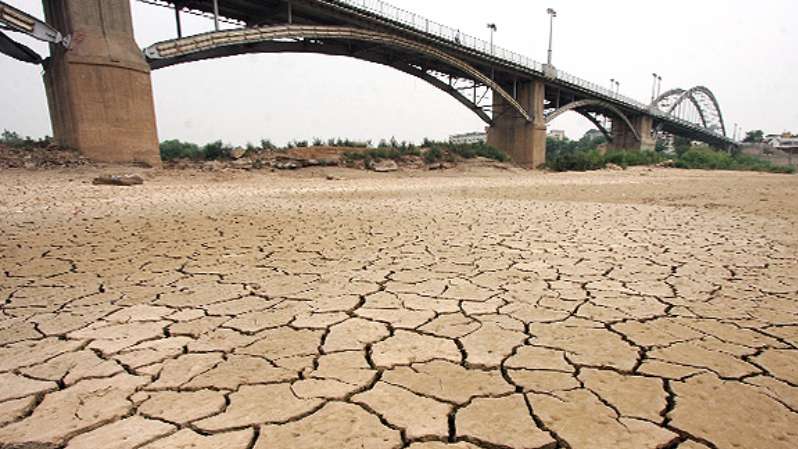 Karoon River dried up due to transferring its water to central regions of Iran
Abdul Latif Jabara
In 1925, the British had control of Ahwaz, known then as Arabistan renamed by Iran as Khuzestan after the colonialists bartered the Arab fertile land for interest in the rich oil and gas fields. Ahwaz, thirty-two times the size of Lebanon, had a population of 10 million made up of mostly Arab Sunnis and Shia with Christians, Kurds, Turkish Azeris, Turkmen and Baluchis minorities. Ninety years of Iranian oppression, murder, confiscating land and property, and building settlements for Farsi families have reduced the Ahwazi population to a half.

Iran was the first to exercise gruesome apartheid. White Rulers (British descents) of South Africa rushed to the new found oppression college and enrolled thousands of potential terrorists and military personal. The Zionist Organization also had studied apartheid curriculum in Iran, graduating with high grades and cloned the repressive college and established branches in Israel. Iran’s psychopath deans established institutions In Iraq, Syria, Yemen, Lebanon and other Gulf and North Africa countries. No one should wonder anymore which is the biggest terrorist state in the world.

Since Khomeini’s 1979 Revolution, Iran has exercised the worse apartheid practices with intentions never to stop. Ahwaz territories hold 80% of Iran’s oil and gas;to the west of which is Iraq, and to the south-west is the Arabian Gulf and Arabian Peninsula;  the Zagros Mountains to the north, east and south-east sit between Iran and the Arab territories. Ahwaz wealth didn’t just stop at oil and gas. It has the rich arable land; three major rivers, the Karoon, Jarrahi and Karkheh played a vital role in the livelihood of the people, provided agriculturally and fishing revenues until the apartheid regime redirected the three rivers to Iran’s territories. Only one percent of the oil and gas revenues returned to the indigents.

Iran’s Mullahs blocked all possible world connection and communication with Ahwaz territories to mask the daily murderous repression. The ethnic cleansing policy routinely exercised by settlers, mullahs and soldiers; forcible eviction and bulldozing homes and properties go on like an endless marathon. The indigents live without clean water; electricity and food are scarce; most of them live in tents and water mains. World human rights and humanitarian organizations have said little and did little to expose the war crimes and crimes against humanity committed for 90 years and counting. The Arab neighbors of the same skin and language also have done little.

How blind and ignorant is the world! How heartless are Arabs! What shame can we gather and pass on to every living person, so all know the Ahwazi’s living plight; understand Iran’s repression and oppression which have exceeded South Africa and Israel’s apartheid by many notches?

In 639, Iran came under the Muslim Rule. Ahwaz changed hands between Arabs and Persians multiple times from the 15th century to the second half of the nineteen century.

Pre-Islamic Iran’s art, education, literature, poetry and philosophy stayed at particle progress. Under the Islamic Rule, the country embraced Arabic language for 200 hundred years, putting the Farsi language on hold. Iran saw a notable surge of great thinkers, philosophers, scholars, poets and writers. Most people don’t know that the works of these great minds were all produced in Arabic and continued beyond the two hundred years. The present regime in Iran denies these facts. Their curriculum, media and propaganda mullahs credit Iran for all Arab progress before and during the Islamic Rule. Iran has gone as far as forging the principles of Islam, classifying all Arabs and Sunnis infidels.

Ancient Persia incubated hatred and venom against Arabs; the Romans carried the great terror for centuries; then the West expanded wars to reach the region and are still doing it. Zionism is the latest by-product that had nurtured and raised traitors like Assad family, the Iraqi and Houthi Mullahs; it also nurtured and raised Sunni, Shia and Christian collaborators. These traitors remain far worse than land mines.