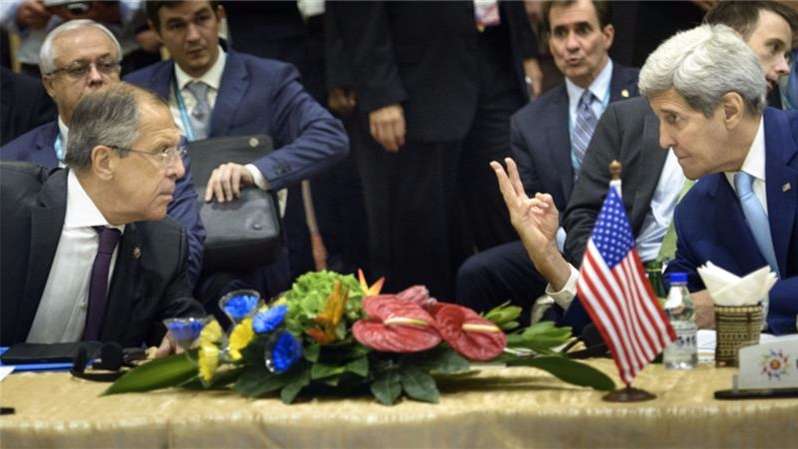 Russia revealed through its deputy foreign minister Sergey Ryabkov the choice it prefers for the political solution in Syria. It is the choice of a federal republic.
This plan looks as if it were clearly directing the negotiations due to be held in Geneva. This means abolishing all the previous negotiating articles in favor of the new plan based on the new reality which Russia believes it has established through its military campaign.
The Russian statement was preceded by the call of the Syrian Coordination Committee (internal opposition) to “focus on negotiating the new constitution rather than the transitional body because the constitution guarantees the transition to a democratic political order.”
However, the goal of such a statement is clearly saying that the target of specifying the form of the coming state in Syria has become more decisive for any political process. These recent statements coincided with publishing an article under the title “Two options for Syria: Federalization or Balkanization?” by Vladimir Mikheev in the website Russia Behind Headlines which is close to Kremlin.
Mikheev says: “Given the fact of the heritage of this bloody conflict, the option of a unified Syria is almost unavailable,” the writer continues his article by saying that: “The fragmentation of the country along ethnic and sectarian lines leaves no other option but to introduce a federal system.”
__new_in_first_article1__
These plans prove day by day that all the stages of the Syrian crisis were well-planned, run and managed and they also prove that there is an alliance that includes Assad, Russia and Iran which controlled all the developments since the early beginnings of the revolution. So, as Assad regime managed to militarize and radicalize the revolution, Iran and its agents were accelerating the demographic changes on a wide scale that stretches from Daraa in the south to Homs in the west. Then, the Russian intervention came to draw the map and front lines not only between fighters but also between the Syrian components themselves in order to suit the implementation of the political solution with the new demographic and geographic situation.
It is not difficult to know the Russian goals behind proposing the federal republic because the proposal didn’t come out of a sudden. It was built within a context that has been set. The direct goals can be summed in three major ones which are suitable to Russia’s strategic plans and aspirations.
The first goal is to eliminate the influence of the Sunni majority because it will refuse and resist Russia’s presence in the region. The second is to maintain its presence in the Mediterranean upon the request of the “Alawite” canton which will stay in a state of fear and conflict with the “Sunni” majority. Thirdly, it is to guarantee the presence of the Kurdish canton along the borders with Turkey which means cutting any possibility of establishing any Turkish relations with the Sunni-majority Arabs and preventing any projects of passing any gas supply lines from the Sunni areas to Europe.
Till now, the federal republic proposed by Russia contains three main regions: Alawite, Sunni and Kurdish. However, Russia realizes that its proposal will be rejected by many regional sides and it knows that federal republics can’t live in the East. In the region’s geographic and demographic logic, federal cantons are only expressions of partition and mini-states but Russia is trying to introduce them in the context of the crisis hoping that this will yield fruits.
Ghazi Dahman in Al-Hayat
Translated from Arabic by Orient Net English
قيم هذا المقال 18 0