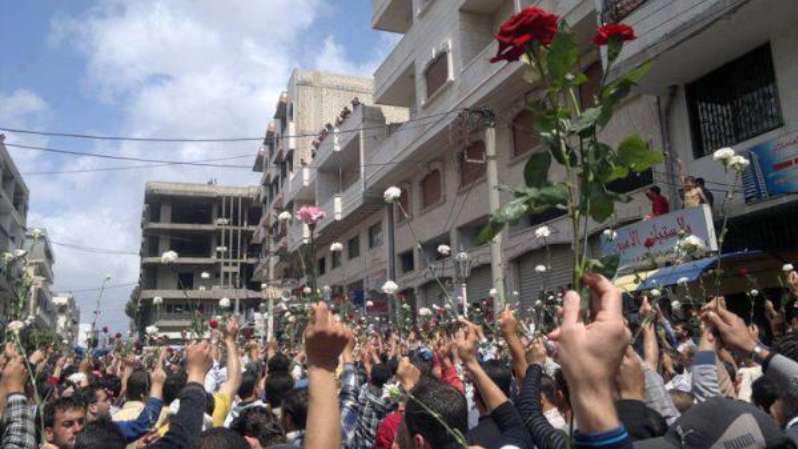 Orient Net - Al-Araby Al-Jadeed
The name of Darayya means in Syriac a plenty of populated houses. It is as old as Damascus itself. It is located in the middle of western Ghouta. It might be the biggest town in Ghouta. The people of Damascus know it very well. They know its mosques and churches. They know how diverse Darayya was as much as they know its good products.
Darayya was the main source of Damascus vegetables and fruits. It became then known for being the most important area for manufacturing middle class furniture.
Despite all these known facts about Darayya, there was still something unknown about it. Only few people who worked in banned civil activities for decades. Before the revolution, few people worked with groups of young men and women to establish a core of civil society organizations. They worked on cleaning the streets, establishing libraries, holding sessions for cultural debates and watching movies. They organized entertaining activities for children too.
Those groups were taught by the well-known Islamic scholar Jawdat Saeed, the founder of non-violence Islamic movement who considers that Islam can’t prosper without democracy. Jawdat Saeed believes that modern Islam flourishes in democratic countries that respect human rights. He believed in separating state from religion in order to keep Islam clean from the dirt of politics.
Many of Darayya’s young men believed in Saeed’s ideology. Therefore, when the revolution started, the peaceful demonstrations in Darayya were a great example of well-organized demonstrations during the first days of the Syrian revolution. Everybody remembers Darayya’s first demonstration on March 25, 2011 which were followed by other demonstrations that took to streets every Friday.
Everybody remembers how Darayya’s demonstrators held roses and bottles of water and offered them to Assad regime soldiers and thugs who were besieging the town trying to convince them that the people and the army “make one hand.”
However, the “one hand” diverged and one part of it started killing the other part. On that day, seven of Darayya’s young men were killed. Their death opened the door of blood and violence in the face of their peaceful protests.
The siege started and military checkpoints grew in number. Communications were also cut and most of the civil activists were arrested and liquidated. The first to be killed was Al-Moutaz Billah Shaar who was killed near an Assad regime military checkpoint on the 1st of May then many others were brutally killed on top of them was Ghaiath Mattar whose body was delivered to his family after 4 days of his arrest. Mattar was the one behind giving roses to regime soldiers but even this good gesture by him didn’t make regime thugs tolerate his civil peaceful activity. Darayya represents the brightest face of the struggle for freedom against death and violence. It still stands as the rose of life that bravely faces the black killers.