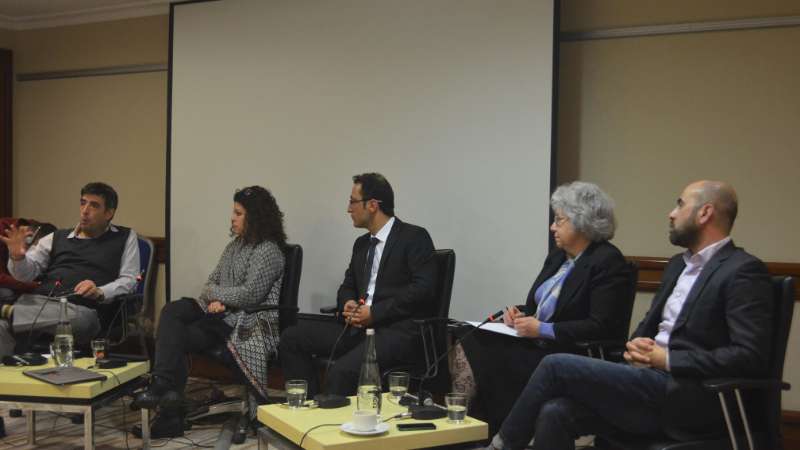 Orient Net - Jamal Mamo
U.N‘s role in resolving conflicts in the world has been jeopardized throughout the long five years of the Syrian crisis. Syrians have already lost their faith in the international community and its ability to stand firmly next to their just cause. However, there are still many Syrian activists and former international officials who are willing to give new hopes for Syrians who are eagerly fighting to make their voice heard.
In this context NPWJ Syria Program Coordinator Rami Nakhla held a panel discussion on February 22 to address the best course of practical action that needs to be taken by Syrian Civil Society Organizations and the International Community to restore the faith of Syrians in International Justice Mechanisms. The panel discussion takes place as a side event during the ongoing workshop “Promoting Accountability through UN Mechanisms with a focus on Women and Children” organized by NPWJ.
The Panelists who participated in the panel discussion are:
Flavia Pansieri: Former United Nations Deputy High Commissioner for Human Rights.
Jeremy Sarkin: Professor of Law at the University of South Africa (UNISA)
Mustafa Haid: Syrian Activist and Dawlaty Chairperson.
One of the major drivers perpetuating the conflict in Syria is the sense of impunity for those committing crimes and human right violations, due in part to the paralysis of international justice mechanisms in holding perpetrators accountable.
In turn, this fuels the feeling of a sense of abandonment by the Syrian people and promotes the idea that ‘Victors Justice’ is currently the only real option for Syria – repeating the cycle of revenge and violence. This has made reaching a political solution through negotiation next to impossible.
In order to restore Syrians’ faith in international mechanisms to facilitate a political solution, we need first to restore their trust in the capabilities of international mechanism to facilitate justice for them.
The Former deputy high commissioner for Human Rights of the United Nations Flavia Pansieri said that the U.N as much as it is secretariat alone can’t find a political solution unless Security Council members cooperate for this goal.
This is essential to deal with the current crisis. But concurrently while working for that solution there are many measures the U.N can and is already taking to address the problem in Syria.
First, in terms of saving lives through humanitarian response.
Second, through providing along with other partners capacity building to ensure that the ground is laid for whenever the current political crisis will be resolved to rebuild the institutions of the state on the basis of transparent, accountable and democratic principles.
Third, documenting the grave violations of human rights that are going on to make sure that when the moment comes and it will come there will be accountability for what perpetrators have committed in terms of human rights violations.
Professor Jeremy Sarkin said that U.N played an important role in implementing transitional justice in countries which have had wide-scale human violations. Despite being delayed due to political conflicts between U.N members, countries such as Angola, Liberia, Rwanda and Bosnia have managed to bring war criminals to justice.
Professor Sarkin advised Syrian activists not to lose hope and to keep documenting everything because documentation is their weapon to prove their just cause.
Mustafa Haid commented on the main issue of the panel saying: “Syrian citizens are feeling let down and abandoned by the whole world. They are certainly feeling alone while facing the regime’s brutality.” Haid added that in order for Syrians to restore their faith in the U.N’s role and its mechanisms of implementing justice many tangible steps should be taken in this concern.
Syrians haven’t been going through hell by a brutal regime that has no equal in human history. They thought that the international community represented by the U.N. would definitely be on their just side.Their hopes and expectations weren’t met to the dismay of the international organization. However, they still count on the conscience of humanity to realize one day that they have a just cause and case.