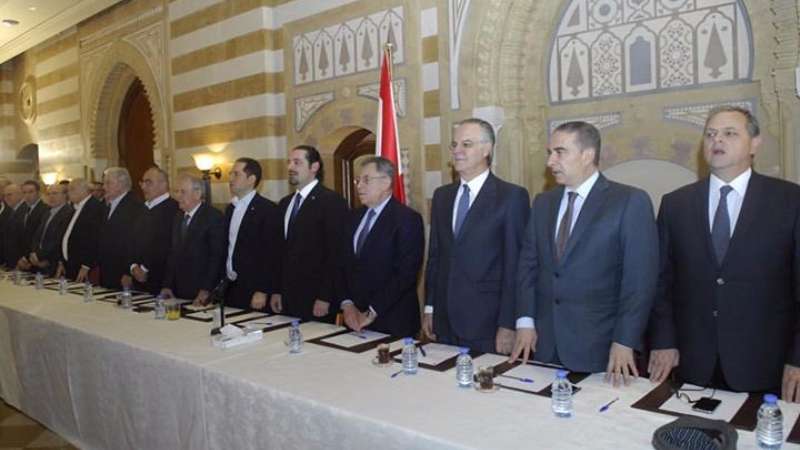 Lebanese March 14 Leaders: Hezbollah must withdraw from Syria
In an issued statement by "March 14th" Leaders following their meeting at the "House of Center" on Sunday evening, they renewed the call on Hezbollah to withdraw from all "battles taking place in Syria and the region," in line with the self-distancing decision, Lebanese National News Agency reported.
The statement, read-out by former PM Fuad Siniora, held Hezbollah and its allies responsible for "fabricating the serious problem with Saudi Arabia and the Gulf States, hitting Lebanon’s livelihood and its financial and social stability."
“If Hezbollah and its allies continue – through illegitimate arms — to put Iran’s interest before Lebanon’s higher interest, that will harm Lebanon’s role and Arab belonging and presence and will eventually affect the social and economic security of hundreds of thousands of Lebanese families — from all sects — who have jobs in the Gulf,” the statement warned, Ya Libnan reported.
__new_in_first_article1__
They also called for an "urgent meeting by the Council of Ministers for the purpose of underlining Lebanon’s reverence for Arab consensus and the sovereignty of Arab States."
The statement demanded the government to respect the Constitution and all international legitimate resolutions, urging it to "convene immediately to confirm Lebanon’s deep respect for Arab consensus and sovereignty of Arab countries."
In conclusion, the statement declared "full support for Saudi Arabia and the Gulf Cooperation Council," denouncing any attack against the sovereignty and independence of any Arab State.
It also stressed March 14th Leaders’ utter refusal of "turning Lebanon into a base for hitting any Arab country and intervening in its affairs, nor turning it into a victim of any country, especially those attempting to impose their control over Arab States," Naharnet reported.