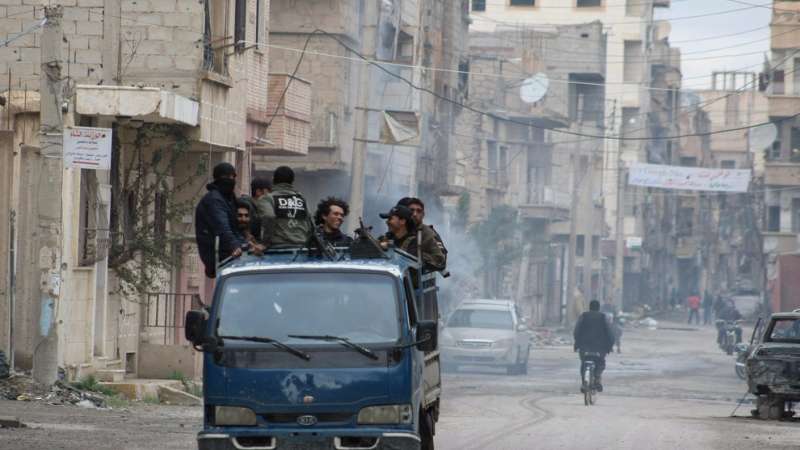 Deir Ez-Zor under the siege of Assad and ISIS
Orient Net - Buzz Feed News
Sara Khaled and her family had finally had enough. She had withstood more than four years of revolution and bombardment. The misery was too much too bear: Food was scarce, medicine even scarcer. She and five members of her immediate family decided to leave the city of Deir Ezzor late last summer.
But first they had to pay a toll — a fee of 300,000 Syrian pounds per person, or about ,300 — to Major General Issam Zahreddine and Major General Mohammad Kaddour, Syrian regime commanders of the military in the area — to get past the first checkpoint. Then they arrived at a second checkpoint, where regime soldiers also demanded a bribe.
“You have to claim that your relative is dying,” the 24-year-old petrochemical engineer said from Germany. “‘I have a sick person; he’s about to die,’ so they feel sorry for you and give you permission to leave. But none of this is free. When we left, we paid hundreds of thousands of Syrian pounds so that we and our car and our family could leave safely.”
The regime of Bashar al-Assad has come under international scrutiny for imposing crippling sieges on opposition-held areas, leading to the starvation deaths of scores of civilians, including children. Such sieges are a time-honored method of warfare, an attempt to force a rebellious population to submit or die. The U.N. is currently investigating whether the Syrian regime’s deprivations amount to war crimes as Assad’s forces, backed by Iranian militias and Russian airstrikes, are on the verge of placing the country’s largest city, Aleppo, under siege.
“Such methods of warfare are prohibited under international humanitarian law and violate core human rights obligations with regard to the rights to adequate food, health and the right to life, not to mention the special duty of care owed to the well-being of children,” Paulo Pinheiro, chairman of the U.N. commission investigating war crimes in Syria, said in a letter to Reuters.
Less scrutinized are the mechanics of how the regime and its denizens are profiting financially from sieges, including from those under its own authority in loyalist neighborhoods.
The city of Deir Ezzor is effectively divided into two sections: The western part is held by the regime and an eastern part is under ISIS control. The regime-controlled districts have been under siege by ISIS for 13 months, leading to a deterioration of the humanitarian situation in those neighborhoods. But what’s hurting civilians even more is the profiteering by regime officials purporting to be their protectors.
According to interviews with more than half a dozen people from Deir Ezzor, regime officials are behind the exorbitant prices that drive people to leave those areas while at the same time profiting by charging even more exorbitant fees to those who exit. Since Khaled’s departure last summer, the price to get out of Deir Ezzor has jumped from between 400,000 Syrian pounds per head (almost ,000) to 1 million Syrian pounds (over ,500) for a seat on a helicopter, say residents.
“After losing the oil fields in Deir Ezzor, [the regime is] profiting from those leaving, and it’s allowing them to stay strong in the city,” said Karam al-Hamad, a political activist from Deir Ezzor, speaking from southern Turkey.
In addition, regime officials jack up prices for food and fuel and sell international aid at a profit, forcing civilians to pay for goods donated by relief organizations such as the Red Cross or the United Nations. Pro-regime businessmen buy homes and cars on the cheap for those desperate to finance their escapes.
“There’s a huge extortion racket going on in Deir Ezzor, where the regime takes bribes for getting people onto helicopters to safety,” said James Sadri, director of the Syria Campaign, a Beirut- and New York-based advocacy group campaigning for the protection of civilians.
The eastern, ISIS-controlled section of Deir Ezzor has witnessed a rise in prices, but nothing near the skyrocketing costs under the regime. For example, under ISIS, a pound of sugar costs about 50 cents, compared to  in regime-controlled neighborhoods, residents said. The disparity in prices is in large part due to the regime taking over any type of resources or aid, hiking up the prices, and selling them for a profit.
Many said they suspect ISIS or its hangers-on are collaborating with and profiting alongside the regime in the trade of supplies into the area. But uniformed members of Assad’s armed forces remain the biggest financial beneficiaries. “The smuggling business was overseen by military men themselves,” said Shadi, a Deir Ezzor journalist now based in Turkey, who asked that his full name not be used out of fear for his safety. “The men of the regime are benefiting. All business is happening under their supervision.”