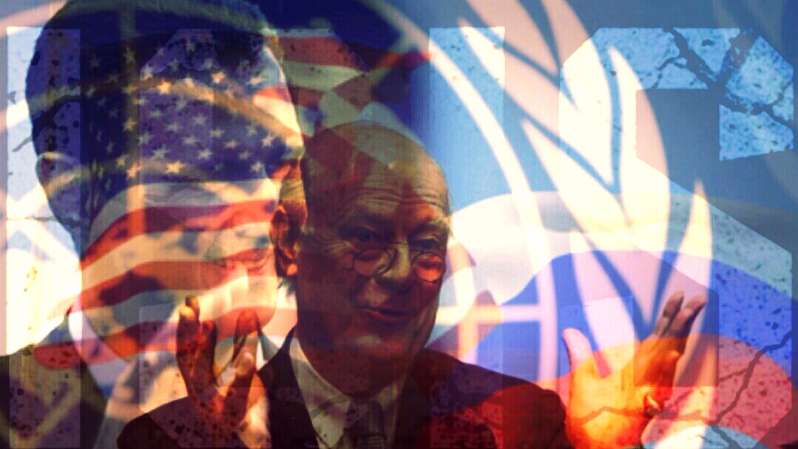 Syrian negotiations; success and failure revisited
With the suspension of the latest Geneva Syria peace talks, many hastened to pass judgments of “success and failure” on a process that may not lend itself easily to such naive readings.

Although confidence-building measures or implementing articles 12 and 13 of UN resolution 2254 - which might consume extra two months of Syrian blood - is quite essential for the talks at least to properly start, success or failure is not in the hands of the Syrian regime or opposition.

The so-called American-Russian understandings need to be subjected to the criteria of fairness and realisticness, so to speak. If the sponsors, the US and Russia, base their proposed solution on preserving and rehabilitating a brutal regime with war crime, their efforts are destined to failure.

In the case of Syria, the situation is different. A solution cannot be based on the balance of power. We do not have two separate powers in conflict. What we have is a regime - supported by outside powers - in conflict with its own people.

Taking advantage of the helplessness of the people and pressuring them to accept this regime that has been killing them for 5 years is doomed to failure. Justifying such an act by the presence of terrorists and empowering the regime means ignoring the source, magnate and manufacturer of terrorism that could generate more terrorism.
__new_in_first_article1__

No negotiations would have any chance of success as long as there is an evil alliance among the US, Russia and the UN envoy. Those parties have gone too far in marginalizing the essence of the conflict itself.

In 2015, Iran came up with a four-point plan for a solution in Syria. The US has adopted Iran’s four points with some amendments, forgetting that Iran considers what is happening in Syria to be no more than a conspiracy that targets a member of “resistance and steadfastness”… the Syrian regime. The US should have realized that Iran has no concern but keeping this regime and confronting whoever says “no” to it.

Russia, in turn, was so keen on coordinating with the Iranians, the Americans and the Israelis as well. It further sustained its support to the Assad regime for the past five years. Lately when it realized that the regime is falling, it intervened militarily and occupied the country in order to keep the regime alive.

Both the US and Russia must have forgotten that Syria, unlike Iraq, cannot be handed over to Iran for demographic, ethnic and geo-political reasons. They have not either realized that Iran cannot be a factor for peaceful normalization or a party to fight the terrorism invited by the regime itself to justify its criminal deeds. Five years did not seem to be enough for Russia and the US to realize such facts.

__new_in_first_article2__
The last thing Russia is interested in is fighting the terrorism the Syrian regime is benefiting from a great deal. The Russians are in for gaining more bargaining chips in their confrontation with the West regarding Ukraine and other dangling issues Russia has with the West.

After frustrating whoever wants to come up with a peaceful solution to the Syrian crisis, the regime has gone along with the Iranian-Russian approach. It is benefiting a great deal from the DAESH threat, from the influx of Syrian refugees to Europe and from the Kurdish element even before the Kurds’ coordination with the Russians and Americans. The thing perplexed Turkey further.

Among the above three factors that gave the regime a heavy dosage of oxygen, DAESH distinguished itself as the factor that brought together four parties: the regime, Iran, Russia and the US. A fifth element is added to this. It is the UN envoy Mr. de Mistura, whose role is to contribute to the smearing of the opposition’s reputation and the polishing of the Assad regime’s image. De Mistura’s UN allowed the regime to edit and sensor reports about the regime’s inhuman behavior regarding barrel bombs, siege and starvation. The other thing de Mistura did was to turn into an envoy of Russia and Iran and to turn a blind eye to the Assad regime’s brutality. As such, he turned into a problem rather than a facilitator of any peace process.

The situation is so complex. No one seems to care about the plight of the Syrian people. Those who are quite serious about helping the Syrians out of their tragedy are also being cornered, besieged and even targeted. In addition to the tragedies surrounding Syrians, their case is being most of the time looked at as a refugee’s problem with a great deal of complaints from regional or Western countries. There are those who think that by donations they can solve the problem. The source of the problem should be addressed. It is people who want freedom; people who want to rid themselves of a dictatorship. If they don’t get that, it is the world’s turn to pay the price. Syrians have no more things to lose. If they win, the world would win.

The US cannot be in just for buying time till a new president occupies the White House, nor can it be just for dragging Putin into the Syrian mud. The destiny of millions of Syrians and that of a country’s are at stake. History does not always give free rides.