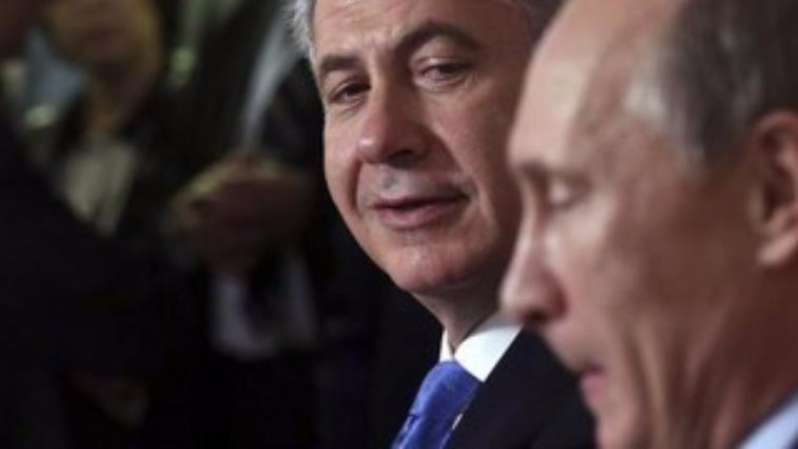 Vladimir Putin is the closest thing to a friend Israel has ever had in Moscow
__new_Underarticle_image_EN__
Orient Net - Reuters
Love him or hate him, Russian President Vladimir Putin’s military intervention in Syria unquestionably upended Middle Eastern politics. Putin supported Assad, established several military bases in Syria, created a de-facto Russian-Shi’ite axis, confronted Turkey and forced the West to re-engage with him.

While all the region’s major players feel the influence of Russia’s military campaign, one country overlooked by commentators analyzing Russia’s Syrian campaign is Israel. Israel’s interests vis-à-vis Russia run wide and deep and are impossible for Israel to ignore.

The history of the Israeli-Russian relationship is complicated, to say the least. The Soviet Union supported the creation of Israel in 1948, but then tilted towards the Arab world in the early 1960s and even threatened to attack Israel in both the 1967 Six Day War and 1973 Yom Kippur War.

With the emergence of Putin, though, Israel found the closest thing to a friend it’s ever had in Moscow. Israel and Russia share a common fear of terrorism, and in 2014 Putin was one of the few world leaders to support Israel’s Operation Protective Edge against Hamas, saying "I support Israel’s battle that is intended to keep its citizens protected." In 2005, Putin became the first Russian president to ever visit Israel, visiting the Western Wall - Judaism’s holiest site - as well as Israel’s Yad Vashem Holocaust memorial, where Putin observed a moment of silence. The Russian president even reportedly purchased an apartment in Tel Aviv for his then-84-year-old Jewish German teacher. Putin returned to Israel in 2012 as the guest of honor at a state dinner and to inaugurate a monument to the Red Army soldiers who defeated Hitler in World War Two.

Despite these positive feelings, Russian national interests remain Putin’s priority, and as Russia modernizes its military and steps to the fore in the Middle East, Moscow possesses significant capabilities to either help or hinder key Israeli interests.

__new_in_first_article1__
First, although Israel remains determined to avoid entangling itself in Syria’s intractable war, there is one "red line" Israel remains determined to enforce: it will not allow the transfer of advanced weapons from Iran or Syria to archenemy Hezbollah. The Israeli Air Force has not hesitated to enforce this policy, striking weapons convoys in Syria destined for Hezbollah numerous times since the start of the Syrian war.

As a result, Russia’s deployment of advanced surface-to-air S-400 missiles is of grave concern to Israel. With a radius of 250 miles and the ability to target up to 36 aircraft simultaneously, the S-400 is a potential game changer. One senior Israeli officer went so far as to describe it as a potential "nightmare." In the event of a serious deterioration in the Israeli-Russian relationship, the S-400 could greatly complicate the Israeli Air Force’s ability to strike weapons shipments en route to Hezbollah through Syria. Israel therefore needs assurances from Russia that the S-400s will not impinge the freedom of movement Israeli jets possess over Syrian airspace.

As a result of these concerns - as well as the general desire to avoid accidental clashes with the Russian military - Israeli Prime Minister Benjamin Netanyahu visited Moscow to meet Putin as soon as the depth of Russia’s military commitment to Syria became clear. After this meeting - as well as a subsequent conversation with Putin in Paris on the sidelines of the Climate Conference - Netanyahu believed Putin respected Israel’s Hezbollah red line.

Six weeks later, though, the picture appears murkier. According to a recent report, Russia is transferring weapons directly to Hezbollah, since Moscow views Hezbollah as a more effective fighting force than the Syrian army. If the report is accurate - and it’s not yet clear it is - two questions emerge: Is Russia transferring the same types of weapons to Hezbollah that Hezbollah has already acquired from Iran, or are they more advanced? And would Russia permit Hezbollah to use these weapons against Israel as well as the Syrian rebels? Either way, Netanyahu must remain on good terms with Putin to ensure Moscow takes Israeli concerns about Hezbollah into account going forward.

The Israelis also fret about Russia’s supply of weaponry to Iran. After initially signing a deal with Iran in 2007 to supply S-300 anti-aircraft missiles, Russia turned around and cancelled the deal - under pressure from the West, and at least partly out of respect for Israel’s security concerns. After heeding Israeli concerns for nearly a decade though, after the conclusion of the recent P5+1’s nuclear agreement with Iran, Russia announced its intention to finally deliver the S-300s it had promised.

__new_in_first_article2__
A former head of Israel’s missile defense program noted that "there will be a dramatic change in [Iran’s] capability, and it does not create a reasonable environment for any operation of our air force." Israel now seeks to use its positive relationship with Putin to limit further spillover effects from Moscow’s decision, in particular to ensure that Iran’s S-300s never reach Hezbollah.

Finally, Israel’s third major interest vis-à-vis the Kremlin is the approximately 200,000 Jews remaining in Russia. Indeed, Putin’s positive feelings towards Israel are echoed by what some describe as Putin’s philosemitism, or affinity for the Jewish faith. Domestically, Putin counts numerous Jewish businessmen and officials as friends, and acknowledges the positive influence of Jews on him during his childhood. Putin also supported the founding of the Jewish Museum and Tolerance Center in Moscow, even donating his own money; stated his "fierce opposition to any manifestation of anti-Semitism and xenophobia"; ensured the return of many synagogues to Russian Jews previously seized by the Soviets and just initiated a law against anti-Semitic Biblical commentary.

Despite Putin’s positive disposition towards Russian Jews, given the history of anti-Semitism in Russia, Israeli leaders surely understand that a serious deterioration in the Moscow-Israel relationship could hurt the status of the country’s relatively small Jewish population. This offers Israel yet another reason to maintain good relations with the Kremlin.

Israeli foreign policy related to the Ukraine crisis reflects Israel’s desire to avoid alienating Putin. After Russia annexed Crimea, Israel abstained from voting on a United Nations resolution condemning Russian actions - which in UN-speak is actually equivalent to voting against it. Afterwards, Israeli Foreign Minister Avigdor Lieberman issued the blandest of statements, saying that "our basic position is that we hope Russia and Ukraine will find a way as quickly as possible to normalize relations, and find a way to talks, and to solve all the problems peacefully."

The US State Department issued a statement noting it was "surprised Israel did not join the vast majority of countries that vowed to support Ukraine’s territorial integrity in the UN." Despite American criticism, shortly thereafter Israel also agreed on the installation of a special encrypted communications line between Netanyahu’s and Putin’s offices. Given the United States’ strong opposition to Putin’s move on Crimea, Israel’s willingness to defy its closest ally indicates the extent to which Israeli leaders seek to maintain a good relationship with Putin.

With the Russian Bear now firmly ensconced on its northern border, expect Israel’s leaders to continue paying close attention to the man in the Kremlin.