Artists in the war-torn city of Idlib in northern Syria have painted a mural celebrating the good health of Germany’s chancellor Angela Merkel, after the leader tested negative for coronavirus on Monday.

The German chancellor went into quarantine at home last Sunday amid fears that she may have contracted Covid-19.

“Angela Merkel welcomed Syrians and refugees from all over the world. She is a good person and we wish her well,” Aziz Asmar, the artist who painted the mural with Anis Hamdoun, told The Independent.

The mural reveals a portrait of the chancellor dressed in one of her signature blazers and holding a red heart.

Behind her is an image of the Syrian flag, with the words “Mrs Merkel, your wellbeing made us happy in Idlib.”

Merkel gained support from Syrians globally after her decision to open the country’s borders to over 1 million refugees, most of them from Syria, at the height of Europe’s refugee crisis in 2015.

“We wanted to compare her goodness to our supposed ‘leader’ Bashar Al Assad,” said Asmar.

But producing such a painting in Idlib was not easy. Just a few weeks ago, the besieged province had faced months of bombardment from Russian forces allied to Assad regime, which displaced over a million people. 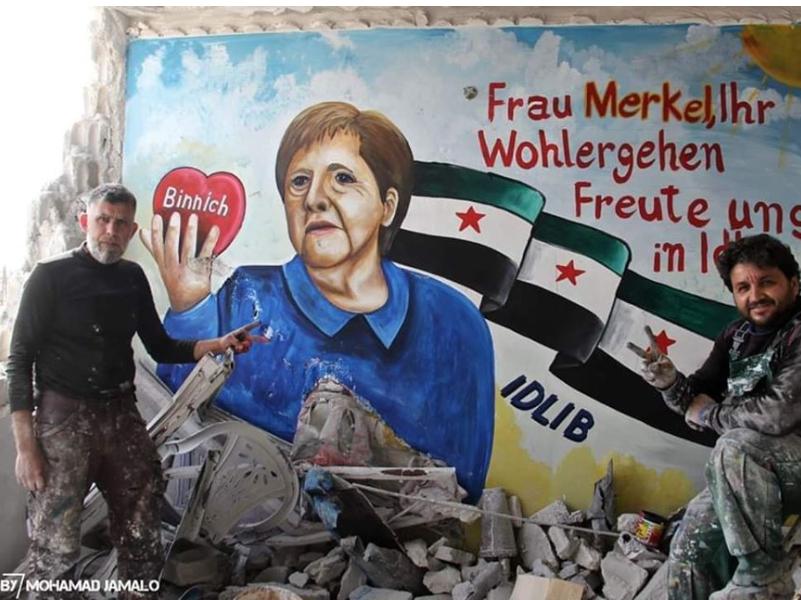 The mural appears in a shelled children’s room among debris from the heavy bombing of the city just weeks before. “You can still see their books and pens,” said Asmar. The building’s first floor was once a nursery for orphans.

“Our painting materials were extremely limited and I had to borrow a camera to film the work,” said Mohammed Al Jamalo, a student working with Asmar who filmed the painting process.

“This painting is also a message. We want the world to see that Idlib is a city with its own culture, art and music. We’re not terrorists,” added Asmar.

According to a blog post from the Syrian Association for Citizen’s Dignity, the Assad regime has so far denied the existence of any cases of Covid-19 in areas it controls, and has arrested several Syrian doctors who reported cases of Covid-19 infections in Damascus.

On Tuesday, the UN special envoy to Syria called for a nation-wide ceasefire, “to enable an all-out-effort to suppress Covid-19 in Syria.”

Asmar explained that he had painted further murals across the city to raise awareness of coronavirus: “Idlib is crowded and there’s not enough in terms of educating people about the virus.”

Based on The Independent