There are many harrowing stories Amani Ballour can recount from her six years running a secret underground hospital during a bombardment and siege in Syria. But it’s the children the doctor remembers most.

“There was a boy, about nine years old, brought in by his parents with terrible injuries. Part of his head was missing and he was bleeding from his ears,” she said.

“It was obvious there was nothing we could do for him, but his heart kept beating and he kept breathing for hours. It was torture for his parents because we all knew he could not live. In the end they wanted me to give him something to help him die. At that point, I just collapsed. I couldn’t help him or them.”

Ballour, 33, whose work at the hospital is the subject of the Oscar-nominated documentary The Cave, has many such horrific stories, which she says continue in Syria even as we speak.

Since 2011, 500,000 Syrians have died in the country’s bitter war and more than five million have been displaced, many into exile. Ballour is now one of them, living in Turkey, but still haunted by her work in eastern Ghouta, an opposition-held suburb of Damascus that was besieged for five years and pounded with bombs, rockets and chemical weapons. The UN has classified the siege – considered the longest continuous blockade in recent history – a war crime.

In recent months Russian warplanes, part of a military alliance with Bashar al-Assad, have regularly attacked the rebel-held area of Idlib, bombing civilians, hospitals and schools in violation of international law.

Last week, a fragile ceasefire was brokered between Ankara and Moscow. Observers say it is unlikely to last. For Ballour it has to hold. The violence, she said, must stop.

Sitting in a Paris cafe last week, Ballour had come straight from a meeting with French foreign minister Jean-Yves Le Drian. She had been in Belgium days earlier and is travelling to Geneva this weekend, then on to the US, to plead with European and American leaders to put pressure on Russia, and to ask for increased humanitarian aid in Syria and for the thousands fleeing the war. Not just concrete measures, but empathy.

“I ask people in Europe to remember refugees are human beings. They have a right to be safe, to live. These people don’t want to leave Syria. I didn’t want to leave, nobody wants to leave. We all just want to survive. When I can, I will go home,” she said.

Ballour’s parents remain in Syria, in fear of reprisals because of their daughter’s high-profile defiance of the regime. But they have become used to her challenging their traditions and expectations.

As a child, Ballour, the second youngest of a family of four girls and two boys, railed against not being allowed to ride a bike like her brothers, and refused to be married at 13 like her eldest sister. Her ambition was to study engineering, but her parents disapproved, insisting it was no job for a woman. They finally agreed she could study medicine at Damascus University.

“It was expected that I would get married and have children. My father would tell us girls: ‘What good is a degree in the kitchen?’, but I was top of the class at school and I wanted to do something. My dream was to graduate, have a clinic and help children,” she said.

By 2012 – a year after the war began – Ballour had completed her general medical studies and was specialising in paediatrics but abandoned the course to treat patients at the east Ghouta hospital. When the air raids intensified, pounding nearby buildings to rubble, the hospital was forced to operate from a maze of underground rooms and tunnels.

Four years later, when she was still just 29, staff voted to appoint Ballour hospital manager in charge of the remaining 100 employees, including one surgeon and a handful of doctors, most of whom were students. Drone footage taken between bombardments shows the extent of the destruction around them. 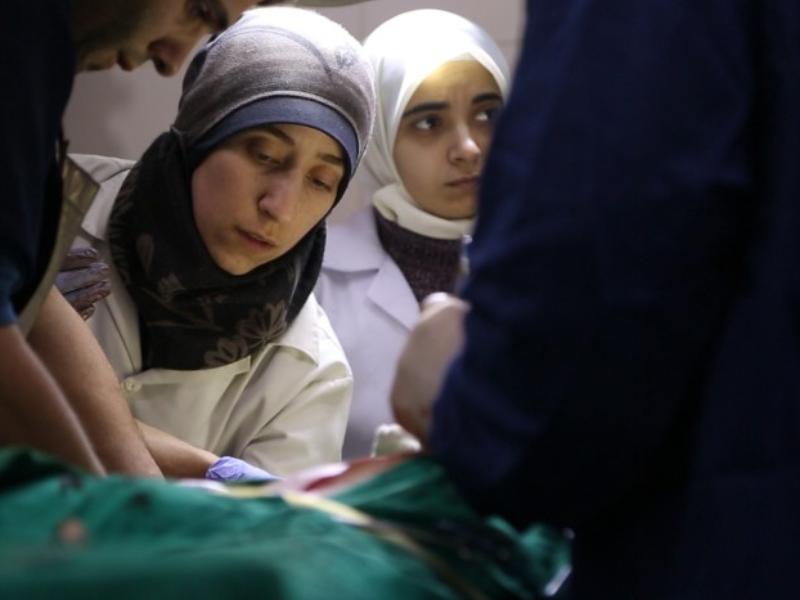 In 2018, under daily, sometimes hoa hrefy, bombardments, Ballour despaired at the hopelessness of their situation as Assad’s forces closed in. She ordered the evacuation of the hospital and the medics who had saved thousands of lives left in fear of their own.

The Cave, recorded over two years by Syrian director Feras Fayyad – who also made the Oscar-winning documentary Last Men in Aleppo – captures the full horror of the war: injured adults, children and babies caught in bombing raids arrive covered in blood or choking from a chemical weapons attack; surgical operations are carried out without anaesthetic to the sound of classical music. Ballour is also forced to confront local men who argue that running a hospital is no job for a woman.

Today, she hopes she can be a role model for Syrian girls, and has established a fund to challenge gender bias in conflict zones.

“I will never forget what I saw. I remember each child and I can see them. I am here to be their voice, to talk about their suffering and their lives. To tell their story of how people are being killed every single day. That is why I am here,” she said