Few now remain in Saraqeb, a half-destroyed town in Syria's last opposition-held province, Idlib. Not long ago it was home to more than 60,000 people, but over the last few months most families have fled the incessant bombing, hunger and winter cold. Among the hardened group sticking it out is defence volunteer, Laith al-Abdullah.

Before the war 42-year-old Laith worked as an accountant for a local financial exchange company. These days the only counting he does is of people he rescues from piles of rubble. Many of them have been caught in air strikes, carried out by Assad or Russian bombers, after returning to retrieve valuables from their abandoned homes.

Laith's wife and two young children are among those who have left. He says he's seen too many deaths to risk allowing them to stay.

"Now they are far from me and we sometimes talk via video calls. I do miss them a lot but I'm also relieved that they're not exposed to the same danger as I am," he adds.

Laith's first loss was his younger brother, Mohammed, who died after being injured in an air strike in 2012, despite Laith's frantic efforts to rescue him. It was his very first shift with the civil defence volunteers known as the White Helmets.

"I helped pull my brother out of the rubble and managed to get him to hospital, but he died a few hours later. He was just 22. It happened during the first intensive spell of bombing we experienced here in Saraqeb," he says.

You might have thought that the experience would have put Laith off continuing to work with the White Helmets, yet it seems to have had the opposite effect.

"After that there were several even heavier air strikes and many people here needed help. Knowing this was the case motivated me to do all I could for them. This helped ease the deep grief I felt after losing my brother," he says.

Laith recalls one rescue operation in 2015, a time when pro-Assad militias had only recently begun dropping on the town what have become known as barrel bombs - barrel-shaped explosive devices packed with nails or other metal fragments. Capable of burying people in their homes, they also send large quantities of lethal shrapnel flying through the air, often injuring large numbers of civilians.

"I remember digging in the rubble with my bare hands for hours trying to rescue an old lady who was trapped in her basement. I could hear her cries but couldn't see her at first. But finally we got her out alive," he says.

Another more recent success also sticks in his mind.

"I managed with the help of other members of my team to pull a nine-year-old girl called Islam out of piles of rubble," Laith says. "She was finding it hard to breathe and under so much masonry that it was touch and go, but I'm delighted to say that she survived." 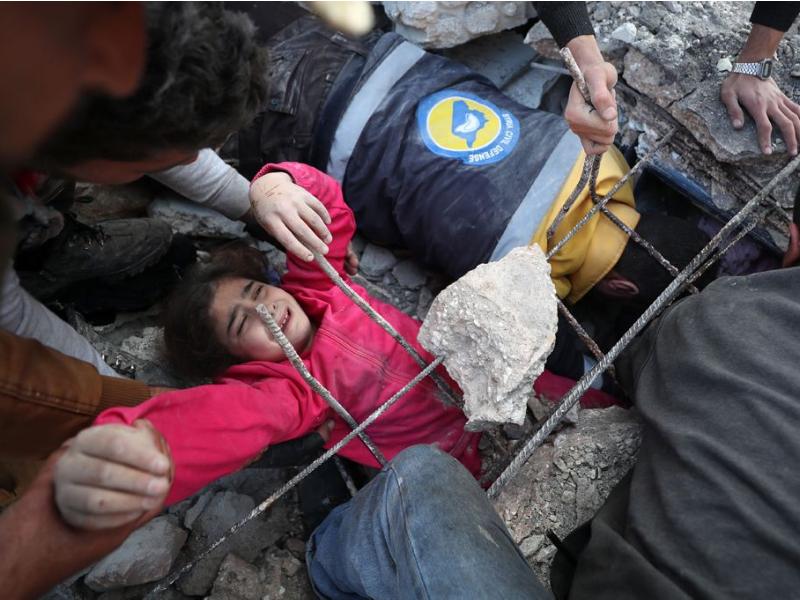 After one recent bombing raid, Laith was photographed emerging from the wreckage of a university laboratory with the body of a young female science student in his arms. But this story did not end well.

"This case was a very memorable one that I don't think I will ever forget," Laith says.

"Her name was Abir. She was still alive when I gathered her in my arms and ran from the lab. She had been close to graduating and you can see me desperately screaming for help outside the building.

"All around I could hear the sounds of ambulances racing to help people and the screams of those who were injured, but all of them were full already and couldn't take her. She died right there as I held her."

Before the war began in 2011, Saraqeb was a thriving agricultural town, a transport hub for the villages of southern Idlib.

"All sorts of people would either come here for our markets or pass through Saraqeb en route to other places. We even had a few tourists," Laith says. "The town was always full of life, laughter and vitality. It was such a busy, happy place. Now it's a silent, empty shell of a town."

Fuel for transport is in short supply and there's little in the way of electricity or wood to heat peoples' homes.

"People are having to look for anything they can make a fire with. They're even burning things they hold dear like their furniture and clothes, as well as valuables that they won't be able to take with them if forced to flee the town," Laith says.

Given Saraqeb's position near the front line in southern Idlib it is likely to be among the first towns to fall if the renewed ground and air offensive by pro-Syrian government forces proves successful.

The thought that Laith may soon have to join the hundreds of thousands of other people in Idlib who have been forced to flee their homes, deeply distresses him.

"I've always lived in Saraqeb and I dearly hope I won't be forced to leave it. It's my life, it's my soul it's everything," he says. "In the end it will all come down to international deals and agreements over which I have no say, but I hope that one day the town will return to what it was before. That's my deepest wish."