Syrian teacher Ahmad al-Hilal listens to his young pupils sitting on a mat reciting the Arabic alphabet in a makeshift school in a tent on the outskirts of a sprawling camp city along the Turkish border.

Many ran for their lives with their mothers under heavy aerial bombing by Assad and Russian jets that paralyzed day-to-day life and damaged dozens of schools and hospitals.

Now, already enduring the difficult winter conditions in the camp, where many tents get flooded, the children huddle on the floor, learning how to read with scraps of paper and pencils.

“These kids suffer from illiteracy. They don’t read or write. They have no one to help them,” said Hilal, who teaches over 140 young Syrians in three tents scattered across several large overcrowded camps on the outskirts of the border town of Azaz. 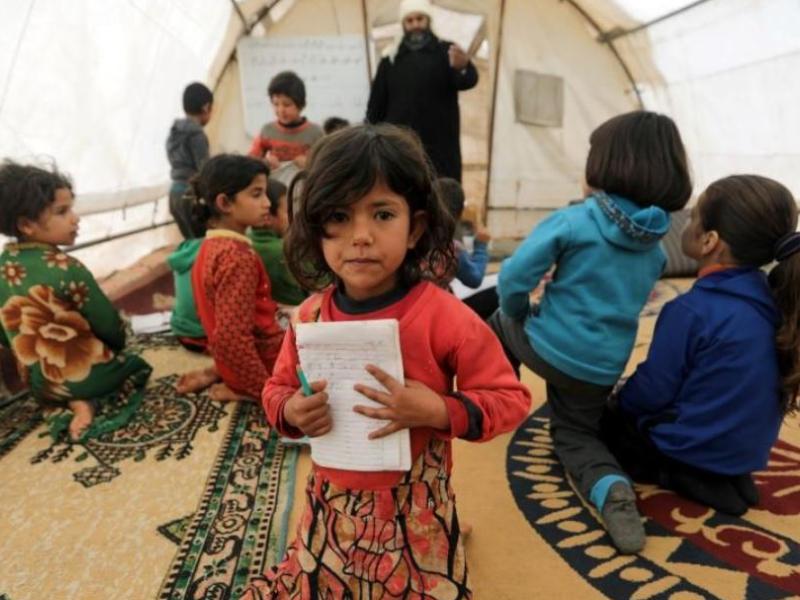 Women and children form a majority of more than 350,000 people who have fled the renewed assault since December that has pushed deeper into the Syria’s opposition-run bastion in the northwest, according to the United Nations.

“We came here as refugees, there are no more schools because of the air strikes, so we haven’t been going to school but we’re studying in the camp here,” said 14-year-old pupil Khaled, who did not give a family name.

Hilal was himself uprooted from his town of Abu Dahur in Idlib province after the Assad militias, backed by pro-Iranian militias seized it.

“We bought some books and parts of the Koran and now teach them inside the camp,” said Hilal, 48, who was a teacher before the conflict that began almost nine years ago.

The UN children’s agency UNICEF has warned that the war will leave a generation who have never enrolled in school, having a devastating toll on education, with 7,000 schools destroyed and about 2 million children out of class.

At a nearby camp in al Bab, volunteers have converted a school bus into the Bus of Knowledge classroom.

Inside the decorated bus around 50 girls and boys as young as five take lessons in maths, life skills, Arabic and religion. 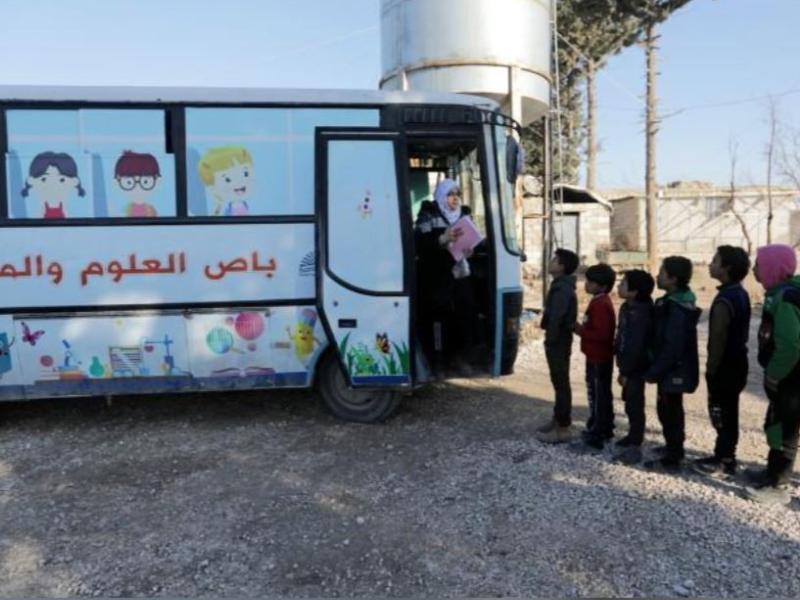 “Children are unable to go to the schools in the city. So, we at the bus come to them with knowledge and provide them with the learning essentials such as reading and writing and basic mathematics,” said Mawiya Shular, 32, who fled a former opposition-held enclave in Homs three years ago.

“The feeling of being displaced gives me the motivation to work with these children. I want to get children out of their sense of alienation” said Shular, also a family counselor.