Three children are dead after they became trapped beneath landfill in a tragic accident in Idlib countryside.

White Helmets teams rushed to the al-Habta landfill in Ma'arrat Misrin city after the incident occurred on Monday (January 6).

The rescue teams frantically dug through tonnes of debris in a bid to free them.

The three children were trapped few metres deep and it took four hours for crews to reach them, but they were dead.

Civil defense teams recovered the three dead bodies of the children where piles of garbage fell on them from the top as a result of a collapse in the landfill. 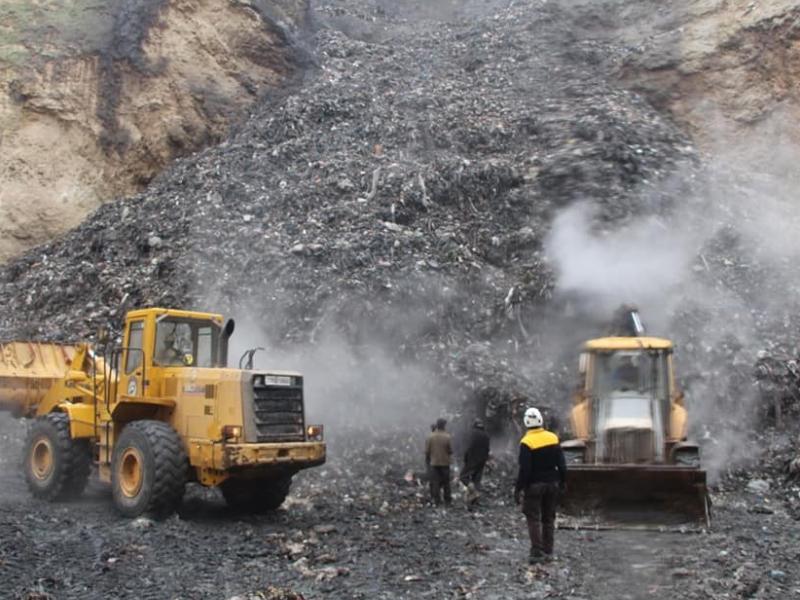 Five children mostly have been scavenging on the rubbish dump when it collapsed on them. After which three children were suspended under the garbage and two went out to inform their families, who in turn reported the Civil Defense teams.

These children should be in school, but like thousands of other children in the war-torn Syrian province of Idlib, they were forced to work every day to support their family.

In October, Channel 4 News published a video report entitled “Syria's rubbish dump kids.” The kids were struggling to survive on a rubbish dump in Idlib, picking over the pitiful waste after they fled Aleppo to escape war, but war followed them.

These kids were struggling to survive on whatever they can, picking over the pitiful waste of a country decimated by eight years of war. They were living of a rubbish dump, eating rotting food.

Some three million civilians who live in Idlib province have nowhere to go. They are trapped. All avenues of escape from the fighting are blocked.

Children's lives have been disrupted in many other ways as well. Over the past year, UNICEF reports 145 schools in Syria have been attacked, depriving tens of thousands of children of an education. The UN has verified 82 attacks on hospitals and medical staff, depriving children and adults alike of essential health care.

UNICEF spokeswoman Marixie Mercado said more than 90% of these attacks were in the northwest, including in Idlib. She told VOA that young people in Syria are being robbed of their childhood and their dreams.

Children continue to pay a deadly price as conflicts rage around the world, UNICEF confirmed. Since the start of the decade, the United Nations has verified more than 170,000 grave violations against children in conflict – the equivalent of more than 45 violations every day for the last 10 years.