The violence, which started on Saturday and lasted in the early hours of Sunday (December 15), was some of the worst since the demonstrations began two months ago.

More than 40 protesters were injured, including some beaten repeatedly with batons by security forces. The clashes brought the city centre to a standstill for over eight hours as security forces fired a stream of tear gas canisters at the hundreds of protesters, who set fires in trash cans on the main streets, in part to mitigate the effects of tear gas.

The protesters chanted slogans against security forces and government officials, and pelted police with stones in scenes not seen in the capital since the demonstrations began on 17 October.

At one point, the scuffles reached the headquarters of one of the main Lebanese political parties, the Kataeb, where many protesters were taking cover. The head of the party, Samy Gemayel, appeared on local television as he tried to separate the protesters from advancing security forces.

The violence comes just two days before the president is due to hold talks with different parliamentary blocs to name a new prime minister.

The government headed by former prime minister Saad Hariri resigned on 29 October two weeks after the nationwide protests began. Political groups have been unable to agree on a new candidate while protesters have been calling for a government unaffiliated with established political parties.

Local television station LBC showed dozens chanting against Hariri, who is emerging as the favourite candidate despite all the political bickering. The protesters also shouted, “people want to bring down the regime” and accused government forces of excessive force.

The Red Cross and the Lebanese civil defence force said at least 46 people were injured and transported to hospitals. 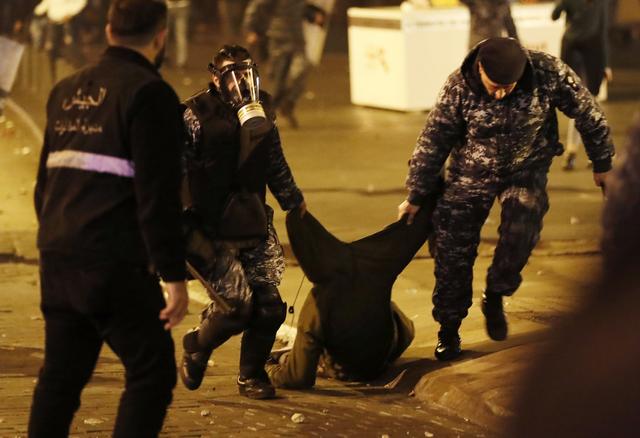 The trouble started on Saturday when dozens of men, some wearing masks, threw stones and firecrackers at security forces on one edge of a camp in central Beirut where protesters have been based. They were supporters of the Shia Hezbollah and Amal groups, angered by some of the criticism of their leaders by anti-government protesters.