Screams of agony became the norm, his own as well as thousands of others. And so did the deafening silence. For three years, Omar AlShogre, 24, was confined in a 4 foot by 4 foot cell, and trapped skin to skin with 40 to 50 other detainees in an overcrowded prison block, beaten with “tank tracks” (belts made from tyres) and electric cables, and facing rape and sexual assault by Assad soldiers.

Sleep was taken in shifts, squatting in pools of pus and bodily fluids that covered the floors. AlShogre accepted that he was dying. He saw at least fifty corpses a day being carried away, which made him forget about ever leaving prison. He told me that his entire being and language was just prison; his body no longer belonged to him; neither did his thoughts.

Syria’s notorious Sednaya Prison had a way of doing that; making itself one’s home. Nevertheless, in fleeting moments during his suffering under the worst conditions imaginable, thoughts of AlShogre’s family in the village of Al-Bayda on Syria’s Mediterranean coast would flicker deep in his mind. 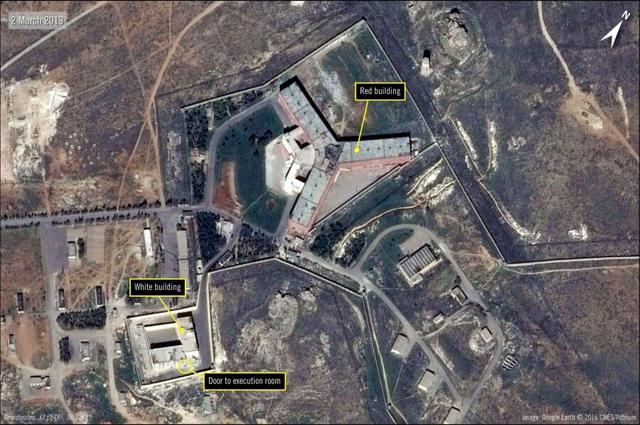 The revolution started in 2011 when Omar was 15 years old; he joined protests “for fun” during which he was arrested and tortured by Assad soldiers until his father Ahmed negotiated his son’s release with the local police commanders who he knew. He was, therefore, usually released within two days.

Torture in Bashar Al-Assad’s military prisons is a critical tool of his success in crushing the revolution. It has been the regime’s main weapon against the civilian opposition.

More than 600,000 people have been killed since 2011, the vast majority by regime militias and their allies. The victims include Omar’s father and two of his brothers, killed in the 2013 Al-Bayda Massacre. Yet, the Assad regime has denied the existence of systematic abuse.

Omar told me about his last moments with his family during Ramadan in 2012, before he moved to the coastal province of Tartous to live with his cousins, as there was better access to schools there. “After receiving my father’s permission, I moved in with my favourite cousins Bashir, Rashad and Nour. I really enjoyed going to school and living with them, especially Bashir, he was like the closest brother to me. Also, their dad was a very educated engineer; an amazing person.”

This uncle was also a former political prisoner in the early eighties, which put his children at risk of being imprisoned. In Assad’s Syria, that alone was enough for them to be arrested. “He was tortured by the government for twelve years,” explained Omar, “so he knew that he wasn’t in their favour, which means that they knew that he’d want to protest or do something, so his family were in danger.”

And so it happened. On 16 November 2012, the Assad soldiers broke into his uncle’s house and attacked Omar and his cousins till they were “pouring blood” and dragged them off to prison. He barely survived the experience; his cousins weren’t so lucky.

He recalled that the Assad soldiers would often place his cousins in rooms where they could hear each other’s screams. One cousin’s pain was used to torment the others until they confessed to crimes they didn’t commit and laughed as they were tortured even more.

“They sat me on a chair, and on the other side they were torturing my cousins. The guards told me, ‘The more you speak the less we torture’. My cousin was screaming and begging me ‘Omar please say anything!’ So, I had no other option, I had to say that I killed anyone to save his life. I even admitted to me and my mum being terrorists.”

The guards ripped his fingernails out with a pair of pliers. They continued to interrogate him as they tore them out one by one.

His eldest cousin Rashad was the first to die, in 2013, after he had all of his ribs broken and he was burnt on several parts of his body. He couldn’t handle the pain any more and died.

A year later, after starving for weeks, Bashir fell ill with tuberculosis. “Bashir died in my arms while I was carrying him back from the bathroom like a baby. He was coughing out blood as the guards were beating us on the toilet, we were only allowed ten seconds in there.”

While scurrying back to the cell, Bashir breathed his last. “I couldn’t save him.” His voice was shaking. “In 2014, my ‘brother’ Bashir died.”

He felt that he had nothing else to live for after that, and nothing left to fear. Thoughts of killing himself crossed his mind but, he pointed out, his faith kept him standing.

Assad regime officials rarely comment on allegations of torture and mass killings, even when presented with reports of massacres documented by international human rights groups. They simply dismiss them as propaganda.

Yvonne Ridley has noted that Syria continues to bleed due to Assad’s ongoing crackdowns on civilians, and reminded us all that the uprising in Syria was never about the rise of ISIS or Abu Bakr Al-Baghdadi. “Let’s remember that ordinary Syrian people became revolutionaries overnight because they finally snapped under the iron fist of Assad; and that, sadly, he is still in power.”

Despite its failure to fulfil the protesters’ aspirations for democracy, though, Omar explained how he is still contributing to the cause today by working with the Syrian Emergency Task Force, which is collaborating with a former military policeman known only as “Caesar”. Caesar escaped from Syria in 2013 with almost 55,000 photographs of victims who were killed under torture during their detention. The photos exposed the brutality of the Assad regime, with emaciated and bruised corpses labelled with prison numbers. Attaching such labels was a duty carried out by Omar during his time at prison Branch 215.

Reports by Human Rights Watch (HRW) have detailed how guards did not provide prisoners with soap or allow them enough time in the bathroom to wash themselves, and that their cells were never cleaned. Several witnesses told HRW that they saw fellow detainees die from complications arising from chronic diseases such as diabetes, heart conditions or asthma caused by the lack of medication and adequate treatment.

Not long after Bashir’s death, Omar was introduced to Sednaya Prison in Damascus, where he was charged with “terrorism offences” during a “five-second trial”. Sednaya was generally the final destination for both peaceful opponents as well as military personnel suspected of opposing the regime.

Dubbed the “human slaughterhouse” by Amnesty International, Sednaya’s officers practiced ever more evil forms of torture. Detainees were forced to act like animals, beating or killing one another over scraps of food. They were also doused with fuel which was set alight to burn and mutilate them.

“Torture was the biggest problem, not the physical part, but the psychological pain,” said Omar. “When they come and ask you to be ready to go through the torture that can kill you, you only have a second to say goodbye to everybody, but you’re not allowed to speak at all. So, you have to whisper or just look at these people and your eyes are enough to say ‘goodbye, I’m dying now’.” Like the air, he added, death was everywhere in Sednaya. 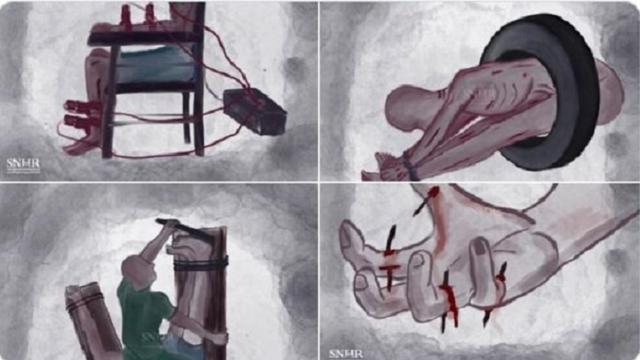 He slept to death and woke up to death. He witnessed big men being forced to rape the youngest boy in the block, who was only 14 years old, until he died. But it was his faith, he repeated, that kept him going.

Despite religious practice being banned in Sednaya, he memorised 18 chapters of the Qur’an during his time there. It was taught to him in whispers exchanged with a long-time detainee, Yassar. He mentioned his name to me in admiring tones, laced with sadness.

Yassar, a 39-year-old engineer, had been imprisoned since 2008 and a little better off than the rest of the prisoners, with his own prison cell and books to read. After being asked persistently, he shared valuable knowledge with Omar on topics such as poetry and engineering; the one subject that they spent many hours on, though, was memorising the Qur’an, and always in whispers.

“It was the easiest thing to do in the cell,” explained Omar. “He was a hafiz who knew the Qur’an by heart, so he would whisper across a page to me and I spent time memorising it. We started from Surah Baqarah, the longest chapter in the Qur’an.”

Strengthening his faith in this way helped him to survive. This was clear during sessions in Sednaya’s torture rooms. Omar and Yassar were dragged to a torture session together where the guards whipped them with the so-called tank tracks. Omar blacked out after the third stroke; when he regained consciousness he was still being beaten.

Numb to the lashes by that stage, Omar heard Yassar beside him whispering and counting: “501, 502, 503…” Confused, back in their cell block he asked Yassar what he had been doing.

“He answered with the most radiant smile that he was counting the number of hits he’d received to keep track of his rewards in the next life. Every hit, he said, was a tree grown for him in paradise.”

Omar added: “It didn’t make sense to me how anyone could count while in indescribable pain hanging from the ceiling, being electrocuted and beaten with steel cables. It sounded stupid.” However, it wasn’t long before this was the only way that he too could endure the pain. Eventually, he “enjoyed” the torture.

“I went through at least 2,000 hours of torture, and they broke every single bone in this small body and my mind was destroyed. They killed more than 80,000 people in front of me, so I needed faith; I needed something to believe in.

“I guess that when you end up in prison, you definitely need power, a power to protect you that’s not a human, trees or animals, but a different power. We were suffering at the hands of human beings so that’s when God’s power made sense.”

He spoke of how Yassar saved his life many times in numerous ways. He would throw his body across Omar to block the lashes, for example.

The naked inmates were reduced to skin and bones, kept barely alive, with maggots feasting on their rotting flesh. Nevertheless, Yassar would still share his scraps of food with Omar.

He went on to describe to me how guards would execute prisoners immediately before serving their food, often placing the corpse’s fingers or head over the meal, so that the blood would mix with the bread and potatoes.

“I know some prisoners who survived prison only to die after being released because they have no idea how to face society. They’ve been psychologically and physically conditioned to normalise the things they’ve faced inside prison; the torture and pain and starvation — everything — became normalised.”

Omar was released in 2015, weighing just 34 kilograms. He now lives in Sweden and uses his own deeply traumatic experience as a driving force for change, gathering evidence that could be used to bring his torturers to justice.

He has also worked as a junior business analyst with Boston Consulting Group for a year, where he built up another family and gained public speaking skills helping him to deliver motivational talks and raise awareness by lecturing at universities and hosting TED Talks.

As the Assad regime still bleeds and breaks its people, it is vital that survivors like Omar are able to share their experiences around the world, which needs to remember that the main cause of terrorism in Syria today is the regime led by Bashar Al-Assad.

Sitting idly by, insists Omar AlShogre, is not acceptable. People must engage in doing something, anything, to bring the tragedy that is Syria today to an end. It has been allowed to go on for decades; the people of Syria have been bleeding for far too long.

Link to the original source of MEMO