The rallies in Kowloon and a small gathering of retirees outside police headquarters on Hong Kong Island maintained pressure on the city's leader, Chief Executive Carrie Lam, to bend to the months-long protest movement's demands ahead of her annual policy address on Wednesday.

Many thousands of marchers joined the rally in Kowloon, classified by police as an illegal gathering. A cohort of police wearing riot helmets and banging their plastic shields followed some distance behind, clearing road blocks left by the march.

Outside police headquarters, about 200 people, many of them retirees, also gathered peacefully, some shouting abuse at plainclothes officers who did not intervene. There were gatherings of several hundred people in other locations, too. A rally in a shopping mall pulled together about 300 people who sang and put up protest posters.

The majority of protesters wore masks over their mouths in defiance of a week-old ban that makes face coverings punishable by one year in jail when worn at rallies. 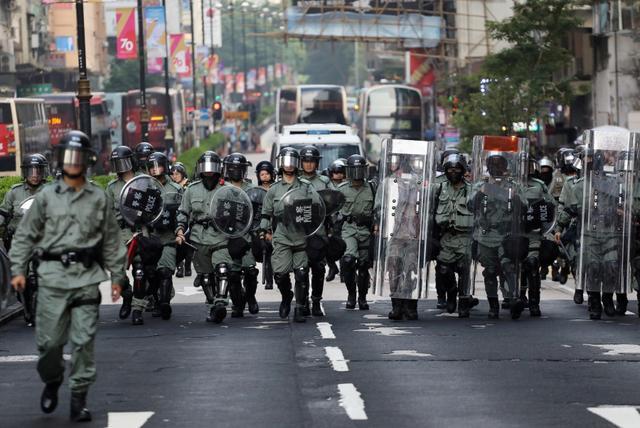 The police force reported on its Facebook page that rioters tossed gasoline bombs inside a Kowloon subway station, "posing a threat to the safety of citizens" but causing no injuries.

Overall, however, the protests were lower-key and appeared to lack the numbers of some much larger demonstrations seen during the more than four months of unrest that have gripped the semi-autonomous Chinese territory.