اورينت نت
Near the village of Hazano in northwestern Syria, children come running through the olive groves every morning to meet the bus that brings school to their improvised tented camp.

Years of Assad-Russian bombadrment and displacement in Idlib province have wrought chaos for the education of children, destroying schools and scattering families into homelessness across the countryside.

More than 400,000 people have been displaced since April alone, when the Russian-backed Asad upped its deadly bombardment of the opposition-dominated enclave. 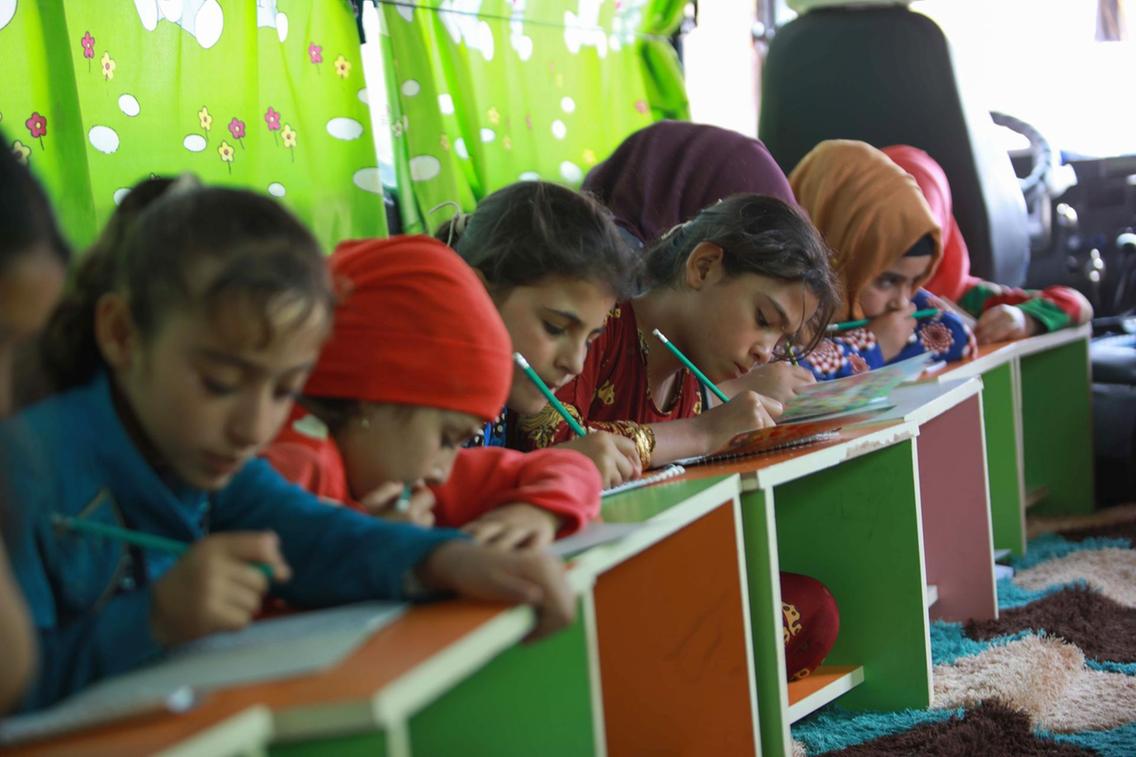 "These children can't go to school, it's too far from where they are," said Farid Bakir, a local programme manager with Syria Relief, the charity that launched the bus project.

In Hazano camp, the children get in line and hope to be among those who squeeze into the bus for a few hours.

A whiteboard is installed in the back, a thick carpet laid on the floor and a few dozen small desks, also used as chairs, are re-arranged depending on the activity.

The ceiling is too low for the teacher to stand fully upright but Hussein Ali Azkour, a young boy wearing a yellow T-shirt, is enthusiastic about his classroom-on-wheels.

"The difference between a normal school and the bus, is that the bus is air-conditioned. It's better than a thousand schools," he said.

"When we fled here, there was no school and they started bringing the buses. If these buses were to stop coming, we would have no education and learn nothing."

The buses cater only for ages ranging from five to 12 and include classes in Arabic, mathematics, science and sometimes English, as well as singing and drawing.

Since the project was launched in May, around 1,000 children have benefitted from the bus programme, Bakir said.

That's a drop in the ocean of problems children, who represent more than half of the Idlib region's three million inhabitants, are facing.

According to Save The Children, the heavy bombardment since late April has damaged or otherwise impacted 87 educational facilities, while a further 200 are being used as shelters for those the Assad violence displaced.

The UK-based NGO says some parents have been pleading with them to shut down schools for fear they would be targeted in regime air strikes.

"As the new school year starts, the remaining functional schools can only accommodate up to 300,000 of the 650,000 school-age children," it said. 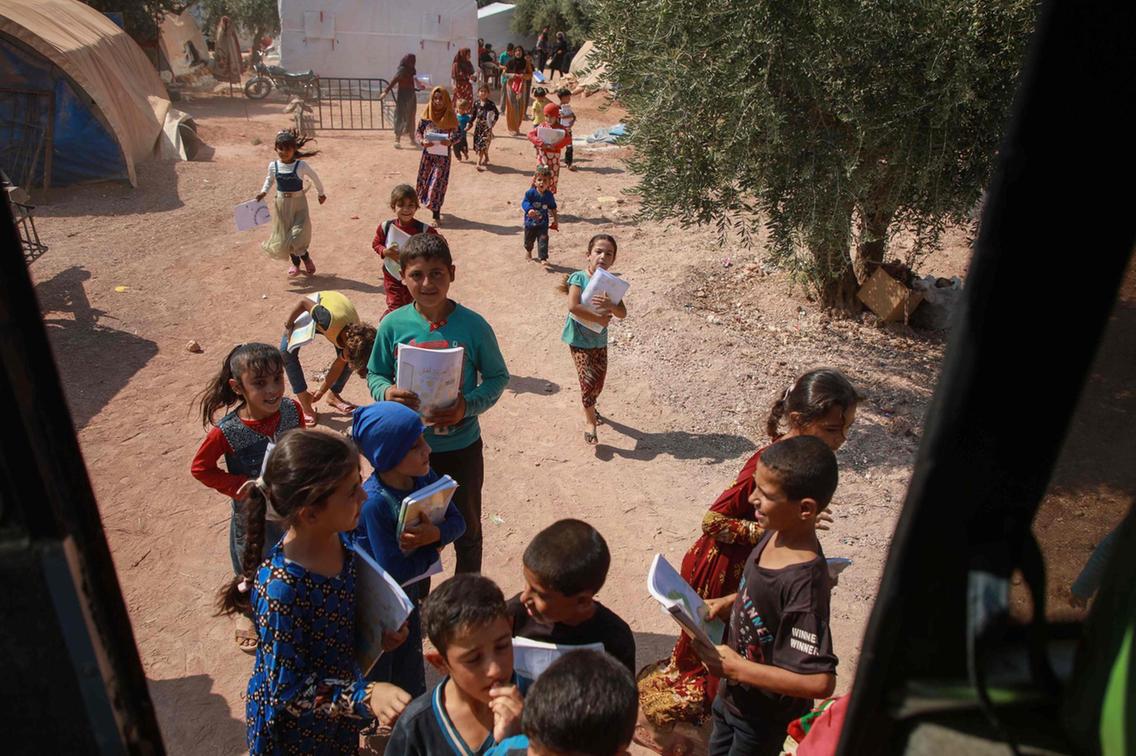 Ragheb Hassoun's children are among the few who have been fortunate enough to receive a few hours a week of lessons through the bus project, but he says the situation is not tenable.

"We want something permanent -- a school on the land where we live," the 28-year-old said.

He and his family have been displaced several times since the start of the conflict in Syria eight years ago.

Hassoun said he would be happy if his children could at least go to school during normal hours in a tent at the camp.

This is what children have in a larger camp near Dana, north of the city of Idlib, where the local school is housed under two large UN tents.

The conditions are dire however, with camp manager Hammud al-Sayah explaining initial planning was done for 50 children, yet attendees now top 375.

Books underarm -- or with bags strapped to backs -- pupils are squeezed around black desks, while those unable to find a seat perch cross-legged on the floor.

Children who are four or five years apart attend the same classes.

"The pressure is huge," Sayah said, admitting that the schooling conditions have a serious impact on the quality of education. 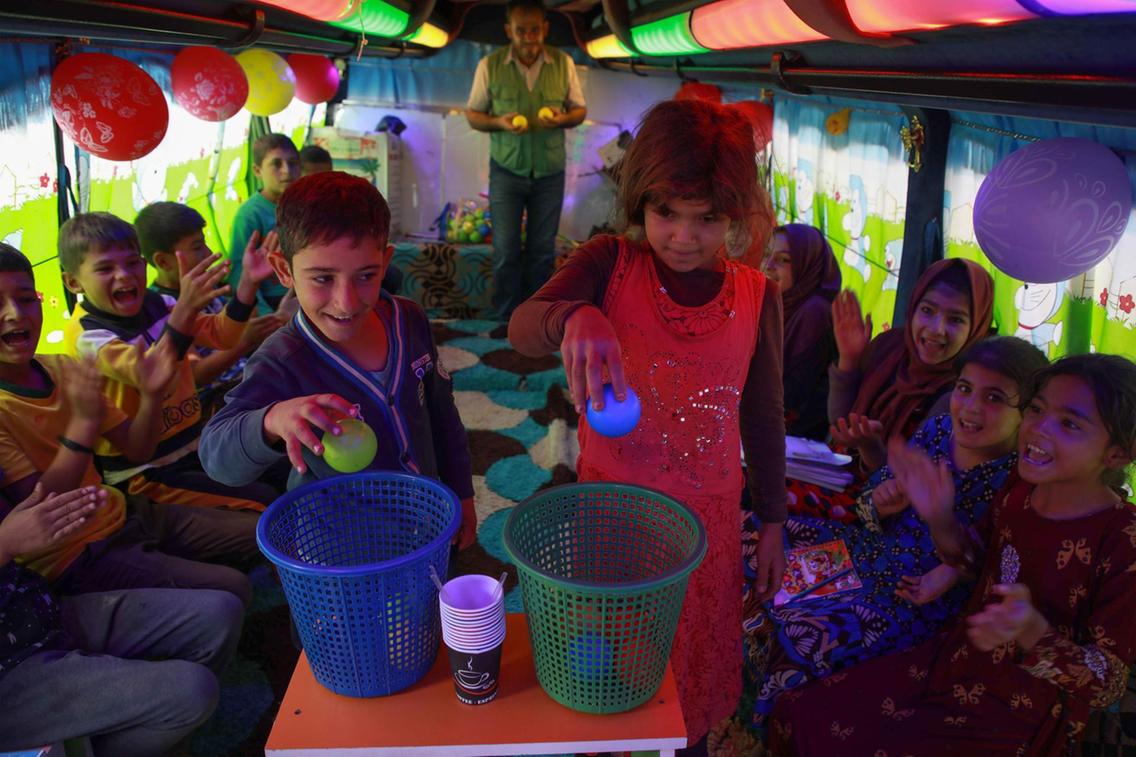 At 10 years of age, Abdel Razaq knows that his education is being compromised.

Standing in front of the white tent he has come to call his school, he said he dreams of a big building "where the number of children in each class is lower".

"And where we could sit comfortably and hear what the teachers are saying."