More Syrians worldwide have joined the hunger strike, demanding for a halt to the bombing of civilians by the Russian air force and Assad regime in Idlib and Hama.

At first, Brita Haji Hassan decided to go on hunger strike, demanding for a halt to the bombing of civilians by the Russian air force and Assad regime and the protection of civilians.

At least 60 Syrian and international activists have joined the hunger strike worldwide. There are non-Syrian participants in the hunger strike, including the Italian activist and poet Francesca Scalinshi and the graphic artist Cory Strachan.

“This is a man-made disaster that we have the ability to stop,” Strachan said in his video message.

“This is a way of protesting against the shameful international rehabilitation of a criminal regime that goes on arresting, torturing and make people disappear,” Francesca said in her video message. 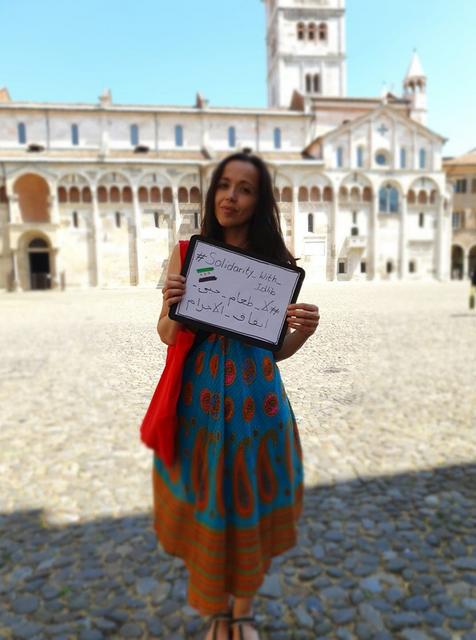 Syrian activists joined the strike have been gathering at 10 downing street in London and at the de la Republique Square in Paris, holding banners in solidarity with the victims of the Assad regime and Russian brutal bombing campaign.

The participants in the hunger addressed the people living in areas under shelling and who are suffering extremely dire humanitarian conditions.

They also addressed to the international community to urge action to put an end to the bombardment everywhere in Syria and stop the killing of innocent children and civilians.

The participants in the strike stressed they would carry on with the strike until their demands to save civilians and put an end to the suffering of the Syrian people are met.

Assad-Russian warplanes and Assad militiamen have killed more than 550 civilians, including children and women. The Russian and Assad attacks also injured more than 2,100 civilians in Hama and Idlib countryside since April 26.