Hundreds of Syrian demonstrators took to the streets for the second week on Friday (May 3) in Deir ez-Zoor countryside, chanting anti-Assad and anti-SDF slogans and calling to topple the Assad regime, local media reported.

Peaceful demonstrators hit the streets in Al-Shuhayl town in Deir ez-Zoor countryside against the rise in the fuel prices and the supply of fuel to the Assad regime, Deir ez-Zoor 24 and Euphrates Post reported.

#D24
Mass demonstrations took place in Ash-Shahil city in the eastern #DeirEzzor countryside against the #SDF policies in the region. pic.twitter.com/YckQ5QimsS

The demonstrators also protested against the security chaos and the deteriorating living conditions.

Demonstrators carried a placard reading: “SDF and Assad regime are two sides of the same coin.” 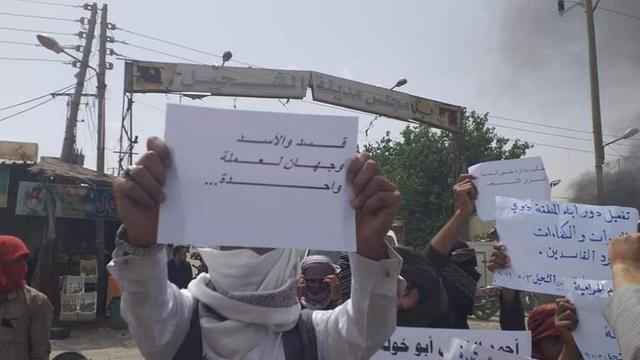 Syrian Democratic Forces (SDF) militiamen released on Friday seven detainees from Khasham town who were arrested in Al-Azbah town, according to Deir ez-Zoor 24.

Tribal elders in Deir Ez-Zoor have presented a list of conditions to stop their sons' protests against the PKK-affiliated SDF.

Releasing the detainees at SDF centres, ending night raids, giving locals a role to run their areas and dealing Deir Ez-Zoor people as Syrians in Raqqa and Hasaka under SDF control are treated were the main demands in the list.

Last Sunday, dozens of protesters who took part in peaceful demonstrations were arrested in al-Tayyna town and al-Zzir village in Deir ez-Zoor countryside.