The air forces of dictator Bashar Assad and Russia’s ruler, Vladimir Putin, have again intensified their attacks on civilians living in the last remaining opposition-held region of Syria. Numerous barrel bombs were used in the attacks, which killed entire families. Thousands are on the run. Observers are now concerned that a ground offensive might follow, which could lead to millions of displaced persons.

For about a week now, Russian and Assad warplanes and helicopters have been bombing villages and cities in the regions of Hama and Idlib in the northwest of the country. But the previous two days have been the worst for months.

“The helicopters and planes that belong to Assad and the Russian army have not left the sky for the past 48 hours. Their madness has increased over the past few hours. Six helicopters, two Russian fighter jets, and a reconnaissance plane are now flying above us,” Syrian activist, Hadi Alabdallah, explained on Twitter.

Talking to BILD, the spokesperson for the Syrian White Helmets, Mostafa Al-Haj, confirmed the catastrophic humanitarian situation in the region. “For four days now, Assad and Putin’s attacks have intensified. Today the bombs are dropping everywhere, in particular on the western part of Hama and various places in Idlib. Assad and Putin are bombing us with barrel bombs, vacuum bombs, and C5 missiles.”

Last week alone, “up to 100 000 people were displaced because of this barbaric offensive by Assad and Putin”, according to Al-Haj. Another 140 000 civilians were displaced between February and last week by the onslaught, the United Nations earlier reported. The victim rate is also tragic and mostly affects the youngest, according to Al-Haj: “Within one month, 141 people were killed, including 48 children. More than 530 people were injured, including 125 children.”

Assad and Putin are bombing together

Videos by activists and local news channels also prove that it is not Assad alone who is bombing cities in Hama and Idlib from above.

Besides the regime’s Mi-17 helicopters and L-37 fighter jets, Su-24 and Su-34 Suchoi fighter jets by the Russian air force are also participating in the terrible attacks.

The Russian attacks have also killed numerous people over the past few days. During the bombardment of an accommodation for displaced people on Thursday morning, four members of this family (father, mother, two children) were killed, and another was injured. 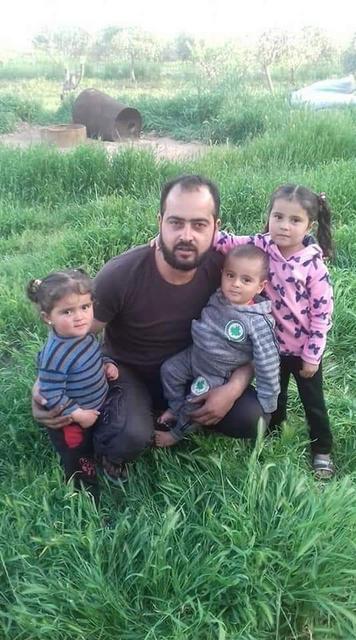 Local activists confirmed the attack on a refugee camp near the village of Kansafra and published photos of the children who were killed during the “Russian” airstrike.

According to the Swiss aid organization UOSSM – one of the last to remain active in the region – Assad and Putin’s attacks are again deliberately targeting medical facilities. Between Monday and Wednesday alone, four hospitals and aid centres were attacked and bombed out of operation.

Dr. Hussam Al fakir, head of UOSSM International, explained in a letter to BILD: “In North Syria, a wave of intense bomb attacks has started. The medical personnel is evacuating facilities, leaving the local population in its desperation without medical care. We have seen this pattern again and again in Aleppo and many other regions. Medical facilities are attacked first, with terrible consequences for civilian victims. We have children under five years of age that have been mutilated by the most modern weapons in the world. This is unacceptable!”

White Helmets spokesperson Mostafa Al-Haj confirmed to BILD: “Most medical care facilities are no longer staffed. Even the White Helmet centres have been shelled by Assad to a degree that we can no longer treat wounded people. We now have to treat some of them in ambulances.”

Link to the original source of Bild