اورينت نت
Gray is a dying town, its residents lament. Big businesses have moved away, taking jobs with them. Though it still lives up to its nickname "Gray la jolie," or "Gray the pretty," many stores now lie vacant, with fading "to rent" signs in their windows.

But for one Syrian family, the picturesque streets, red-tiled rooftops and quiet river walks offer hope of rebuilding their shattered lives, away from the fear of death lurking around every corner in their homeland.

"I will start to love life another time," said Abd Alwahab Alahamad, a 43-year-old Damascus oncologist. "Because sometimes (in the) last two years, I thought it will be very difficult to stay alive." 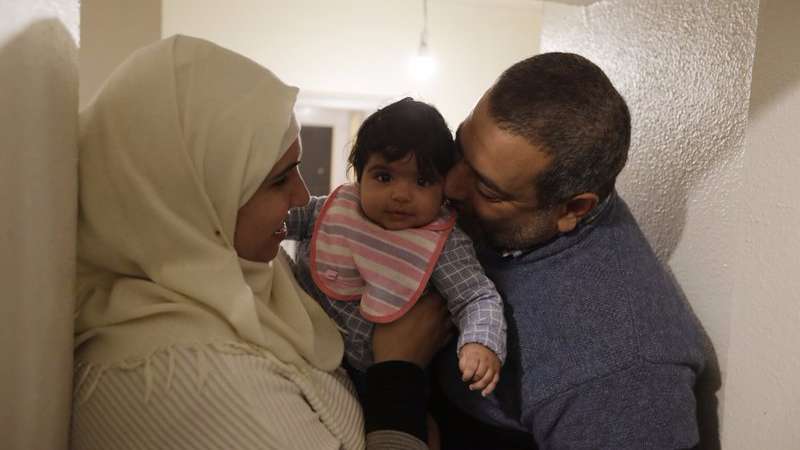 Like hundreds of thousands before them, the Alahamads risked everything to escape war, embarking on a perilous and uncertain journey through checkpoints, bombs and a nightmarish sea crossing to Greece.

But after months of uncertainty and doubt, their luck began to change. Alahamad, his wife Iman Mshanati and their three children — 5-year-old Nora, 2-year-old Ahmed and baby Layan, born in Greece six months ago — were among the fortunate few accepted so far into an ambitious European relocation program.

Launched in late 2015, the program was designed to relieve pressure on Greece and Italy, the main entry points for more than a million people fleeing into the European Union. But it has come under fire for moving too slowly. Of the 66,400 people who should be relocated from Greece by this September, just 7,286 had been resettled by the end of December, according to figures from the International Organization for Migration, which organizes the transfers. France has taken in the most refugees from Greece, 2,420. The next highest-receiver is the Netherlands, which has taken 836.

Applicants cannot choose their destination. The Alahamads were assigned to France, a country neither the Russian-trained doctor nor his wife, a 33-year-old nutritionist and beautician, had ever visited.

"We are going into the unknown; We do not know the city, the people, nothing," said Mshanti in a small apartment in Athens the day before the family’s flight to Paris, three small suitcases sitting neatly packed on the floor. "But we hear from people who had left before us that they are happy, and we felt relieved."

The family had never intended to leave Syria. They didn’t expect the 2011 street protests against Assad to turn into a full-blown war.

"At first everybody thought — not only me — that it will finish tomorrow, the day after tomorrow," Alahamad said of the early days of the rebellion.

The trials of their months-long journey are etched on their faces.

In 2014, warned Assad regime "forces" were looking for him after he treated a man for gunshot wounds, Alahamad fled Damascus. He moved the family to an eastern town near the city of Deir-e-Zor, where his parents are from, and quickly found a job in a private clinic.

But the war followed.

The area was overrun by ISIS extremists who imposed strict Islamic rule. Mshanti had to wear the all-enveloping black abaya; Alahamad was questioned for treating female patients, and forced to watch a public killing. A family friend was beheaded, his body left on the street for three days. Relentless bombings claimed the lives of relatives and friends.

After a particularly close call, when rockets landed near their home, wounding relatives, Alahamad decided the time had come.

"I left. I left everything behind," he said. 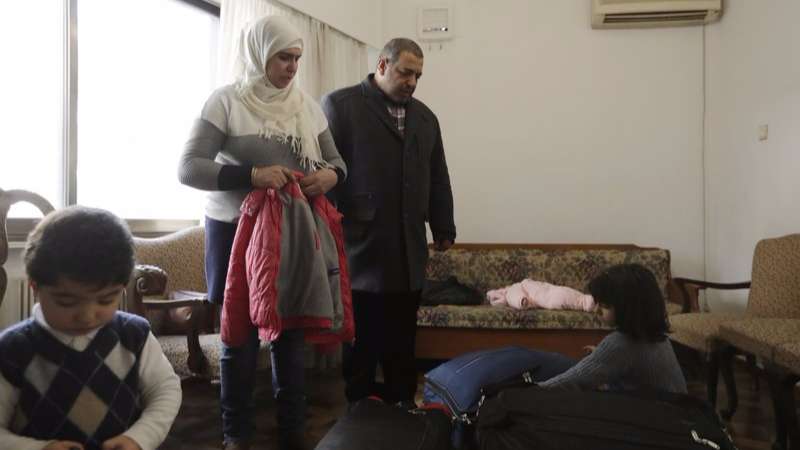 With two young children and a pregnant wife, the journey was harrowing. The nighttime treks and border crossing, the smugglers, the ride jammed into the back of a truck with nearly 100 others. But nothing compared to the boat crossing from Turkey to Greece. Nora cried, clutching her father’s hand. She was convinced they would die.

Their first try failed. The couple paid 800 US dollars each, for four spots in an overcrowded dinghy that nobody on board knew how to drive. They went round in circles on the Aegean Sea until the Turkish coast guard intercepted the boat and took all its passengers to a detention center.

On their second attempt, a fellow passenger motored for hours through rough seas to the Greek island of Chios. The family reached mainland Greece 10 days later.

Alahamad spent months working as a volunteer doctor in refugee camps housing some of the more than 62,000 asylum seekers stranded in Greece by border closures and a deal between the EU and Turkey intended to stem the flow of migrants into Europe. He and Mshanti thought of staying, but Greece’s asylum system was overwhelmed.

So they applied for relocation. Months of waiting ensued, punctuated by interviews with authorities for the relocation procedure and Layan’s birth. Then in September, the news they had been waiting for: Their application was successful.

The Alahamads were assigned to Gray, a pretty, sleepy medieval town in eastern France of about 6,000 people on the River Saone just before it flows into Burgundy. They would be part of the second group of families sent there from Greece. The first arrived in March, with a maximum 29 people arriving each time. 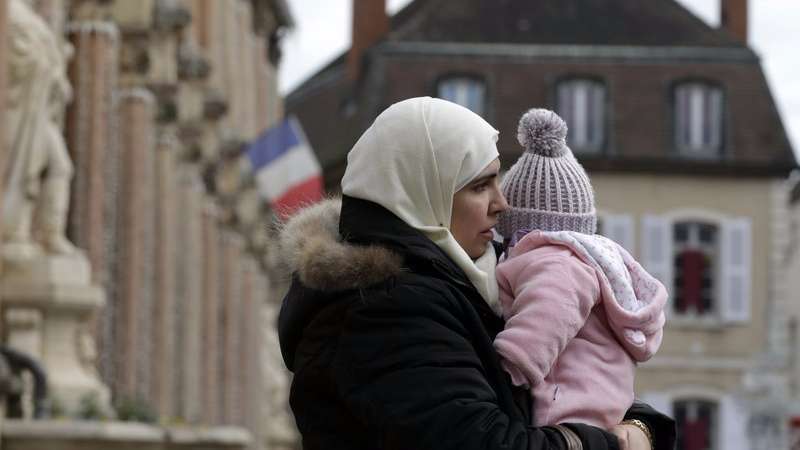 Gray Mayor Christophe Laurencot stipulated the town would accept only families, and each would be assigned a social worker. The families are given housing while they apply for asylum, a process that normally takes about four months in the fast-track relocation procedure, said Guillaume Germain, regional director of the French Immigration and Integration Office. Once granted refugee status, they can stay in state housing for another six months while searching for jobs and living arrangements of their own, but are free to move elsewhere in France if they prefer. Of the first five families to arrive in Gray, four have moved elsewhere.

But small, close-knit towns do not always embrace outsiders. To facilitate integration, Laurencot decided the best tactic was full transparency and informed residents about the program before the first arrivals in March.

"We had reactions straight away," he said. "Good, less good or bad, I had them all." Some residents offered overwhelming generosity, while others questioned why the state should help foreigners.

But, Laurencot said, "France is after all a country of hosts, a country of reception, a welcoming country. And it’s not enough to say it; we had to do it."

So far, the mayor’s tactic appears to be working.

"It’s very, very good, we see them pass by, there are no worries on that account, everything is going well," said Stephanie Vanhee, who runs an optical shop in Gray. Toddler Ahmed squealed with joy at being allowed to pet her puppy, Morito, during the family’s first tour around town. "It must be done, you know. We must receive them." 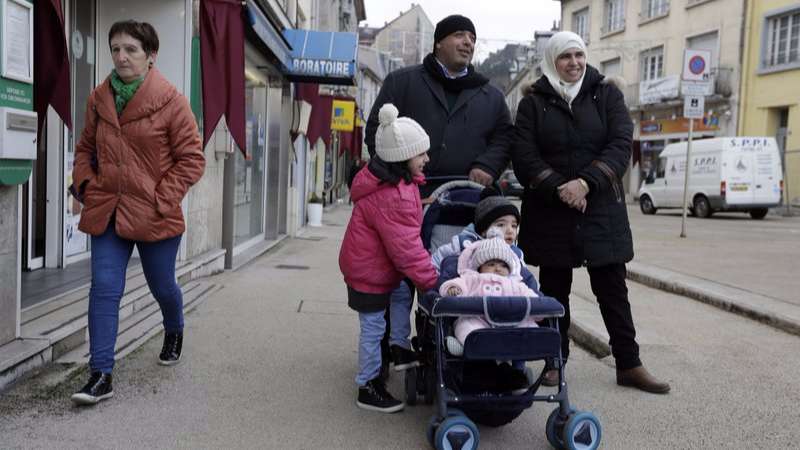 Clothing store owner Roberte Fouillot said reactions were more or less positive, although there was some initial reticence to the idea, what with the recent terror attacks by Islamic extremists and demands on social services by needy French people. But images of the war in Syria in the media shocked her.

"These poor kids, these poor families who are suffering — it’s unacceptable in our day and age," Fouillot said.

As for the issue of integration, Fouillot does not foresee problems.

"They are people like everyone else. We all have our religion," she said. "Today, if everyone reached out to each other, well, there might be less wars, less misery in the world." 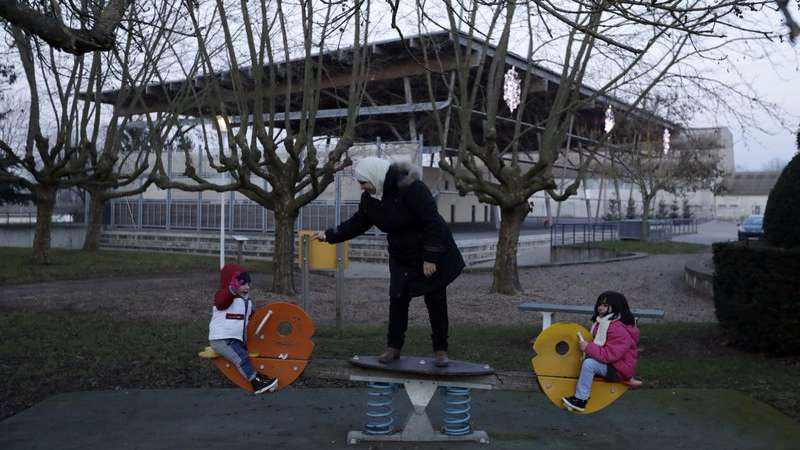 The Alahamads arrived in Gray on a foggy mid-December night. Allocated a bare but warm apartment, Alahamad and Mshanti breathed a sigh of relief. They look forward to learning French, finding work and sending the children to school. Alahamad hopes France will recognize his Russian medical degree.

An exploratory walk, with Nora and Ahmed playing excitedly in a small playground near the river, cemented their impression: The town was perfect. The worst, they hoped, was finally behind them.

"It’s difficult. We lost many things," Alahamad said. "I want to start a new life. Now, I think we have a chance."