اورينت نت
"We ran out of gas. We need help."

The Greek Coast Guard official wasn’t buying it when Mahmoud Alkuder, a Syrian refugee from Aleppo, called him from a Jordanian cell phone number in October 2015 asking to be rescued from the Mediterranean, about a mile from the Greek coast.

So the official hung up. Alkhuder — who fled from Syria to Jordan in 2011 and was now trying to reach Greece from Turkey, where he’d been visiting his family — called back with the same plea.

"I’m stranded with other refugees on a small boat coming from Turkey," he said. "We need help."

"If you’re really stranded with other people," the coast guard asked, "why is there no noise behind you? No chaos?"

Mahmoud explained that he had asked the men, women and children crammed into the dinghy — meant to carry "a maximum of maybe thirty people," but holding about 60 — to keep their voices down while he called for help.

He could send a photo to the officer via WhatsApp to prove it, if he wanted.

"Send it to me, then," the officer replied. 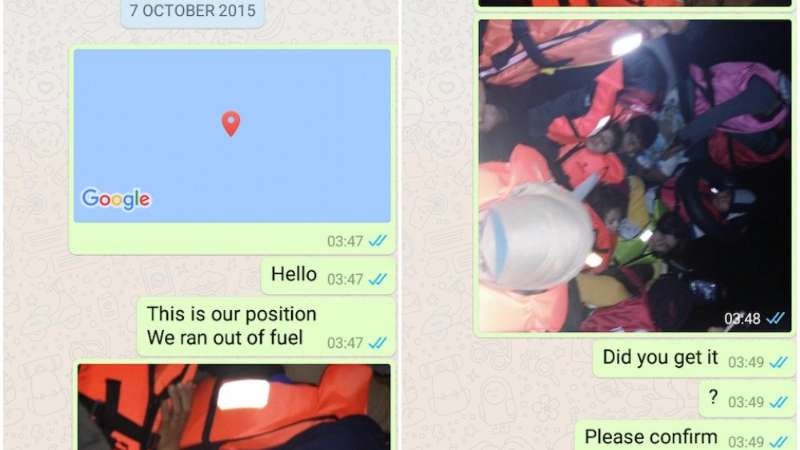 About an hour later, Alkhuder’s boat was being towed toward the Greek island of Lesvos. He didn’t know that he’d be back on the same island within a year, advising asylum-seekers like him how to maximize their chances of being granted a visa and allowed into Europe.

Now living in a small German city outside of Dusseldorf, where he is finishing his MBA online, Alkhuder is bringing his dependence on technology full circle by developing an app to connect Germans with asylum-seekers.

"Refugees want to meet Germans, and vice versa," Alkhuder said. "But they rarely have the chance to connect, or to help each other. I’m trying to change that."

’I knew I lived in a corrupt country’

When he graduated from the University of Aleppo in 2011, Alkhuder was under no illusions that his law degree would be useful in Syria.

"After I graduated, I knew I lived in a corrupt country," the 30-year-old from Aleppo told Business Insider in a Skype interview from Germany.

"Imagine if, as a lawyer, you could bribe — and I’m not exaggerating — 80% of the judges in your country," Alkhuder said. "Or maybe more. That’s what it’s like in Syria: the role of lawyers there is to bribe your way through the legal system. That’s how you win cases."

Politically active and disillusioned with the system, Mahmoud supported Syria’s protest movement "from the start."

His legal education made him acutely aware of how Assad was taking advantage of the movement to imprison dissidents indefinitely and accept huge bribes for their release. By 2012, the payments guards were demanding from families to have their relatives released were more than what most Syrians could afford.

So Alkhuder fled to Jordan, not least to avoid the two-year military service required of all Syrian men when they turn 18 — service that, at that point, would have forced him to "kill or be killed."

He soon found, however, that the swell of Syrian refugees flooding into Jordan — roughly 1.4 million — had resulted in a protracted housing crisis and made work permits nearly impossible to obtain.

"Syrians in Jordan can’t get a work permit," said Alkhuder, who fled to Amman in 2011. He was fortunate, he said, in that he had a friend there who owned a computer company and agreed to give him a job.

"I participated in demonstrations, too, in front of the Syrian embassy in Amman," Alkuhder said. "They allowed us to do that. It was the first time in my life where I felt like I had freedom of speech." 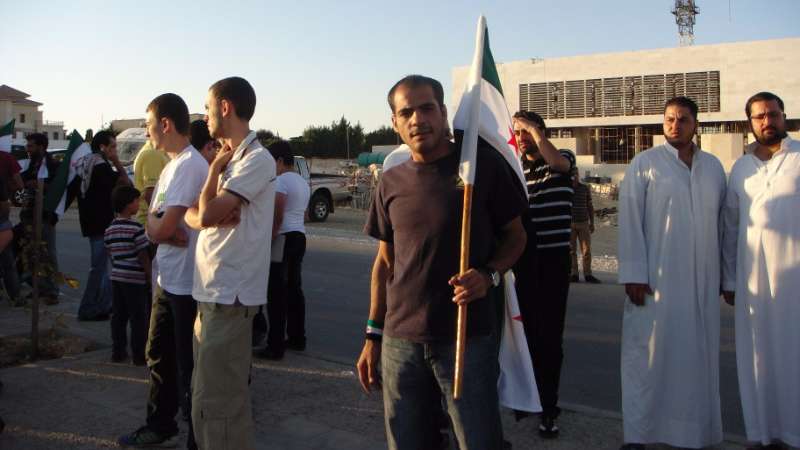 He’d soon realize how limited his freedom still was, though. Wanting to pursue an MBA in Edinburgh, Alkhuder applied for a student visa to the UK via the British embassy in Amman. His application was rejected because the embassy was not confident that he would return to Syria after he finished his business degree.

So he decided to try for a different European country; one which he thought seemed "professional, neutral, and nondiscriminatory" — Germany.

"I chose Germany because I thought they seemed very professional," Alkhuder said. "They’re perfectionists. And I’m kind of a perfectionist myself."

He wanted to see his family first, though. So he flew from Amman to Turkey, where his family had fled a few years prior. From there, he paid a smuggler masquerading as a boat captain to take him on the small dinghy bound for Greece.

That’s when the boat broke down, forcing Alkhuder to call the Greek coast guard official who, after some persuading and a WhatsApp photo, towed them all to safety.

Alkhuder and his companions were luckier than others.

Alkhuder arrived on the Greek island of Lesvos in October 2015, and eventually made it to Germany.

"Once I arrived, I turned myself in to a refugee reception camp," he recalled. "I started to translate for people to help them, and then volunteered officially to translate from English to Arabic and vice versa."

That’s when he decided he wanted to go back to Greece, "where a lot of refugees get trapped because they don’t understand how to navigate the asylum process," he said.

Advocates Abroad, an organization comprised of attorneys and human rights experts who offer free legal advice to refugees throughout Europe, was eager to accept Alkhuder’s help.

"I was a good asset because I spoke both Arabic and English," he said.

He did not only help fellow Syrians, however — he offered legal advice to refugees from all over, but those who needed it most, he said, came primarily from Africa.

"It would be unfair to the other refugees if I spent my time helping Syrians, just because I am Syrian," Alkhuder explained. "So I mostly helped people who had arrived from Nigeria, Eritrea, and Somalia." 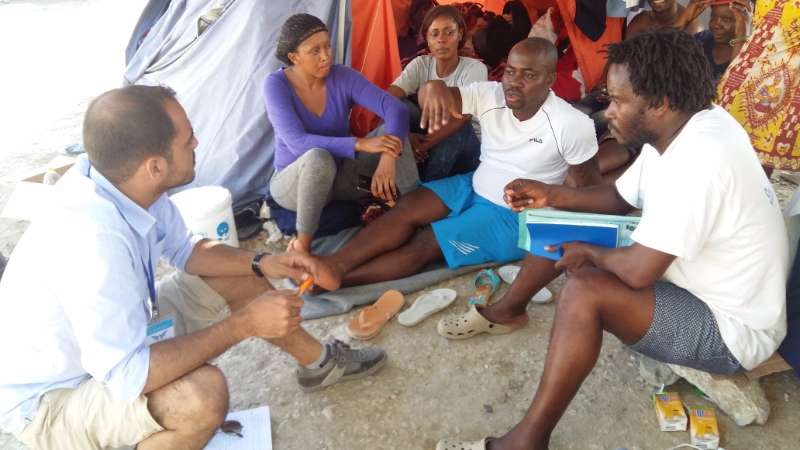 Most asylum-seekers he worked with at Lesvos’ Moria refugee camp, Alkhuder said, didn’t know their rights — especially when it came to the all-important asylum interview.

"One of the most important things I advised them on was how to handle the interpreter," he said. "Many look to the interpreter as some kind of God, so they’re afraid of him or her. The interpreter isn’t allowed to express their opinion, but sometimes you wind up with a terrible translator who can twist a piece of information and dramatically change everything."

Without a lawyer present — which most asylum-seekers don’t realize they’re entitled to — how the interpreter translates the refugees’ story to the asylum officer can be decisive.

Another mistake the refugees often made, Alkhuder said, was referring to asylum officers as a "judge" and to the asylum interview as a "court."

"That’s really wrong," he noted. "The officers are civil employees working for a foreign government. If the refugees think of the interview as a court, and of the officer as a judge, then they will go into the interview afraid."

In any case, Alkhuder said, the message he heard from every refugee he advised was the same: "They don’t want clothes, food, money, they just want opportunity," he recalled.

"They need a chance to start a new life — to live, work, to earn their own money. And some want even less — one man I spoke to from the Democratic Republic of the Congo said that all he’d dreamt about for months was cold water."

Alkhuder’s own attempts at starting a new life and integrating into German society are punctuated by nightmares of torture and arrest that have plagued him almost nightly since he left Syria, he said.

Two of his brothers, both pharmacists, were thrown into an Assad regime prison for giving medical treatment to wounded protesters shortly after the revolution erupted. Only one of them came out of the prison alive.

"I left Syria four years ago and I still dream about it," he said. "But now, when I think of Germany, I think of it as my home country. I have basic dignity here. I feel like a human being again."